Dire Fleet Daredevil got a ton of attention when spoiled…well, more accurately, a couple of people on The Source and Reddit thought that it might be fun in RW D&T. I didn’t bother testing the card at first. I initially believed that the card had a very high ceiling for how good it *could* be, but that on average it would be a mediocre card. I made the comparison to Phyrexian Metamorph; while it *can* do many things, you can’t rely on it to consistently do what you want. Then a handful of results started rolling in. It popped up in a few 5-0 finishes on MTGO and in a few decklists at various events. I thought the card was still over-hyped, but at this point I decided to test it to see what the card could do.

Conceptually, there were tons of things that sounded very appealing. Snagging a relevant card in response to a Past in Flames, getting to exile relevant graveyard-based spells like Life from the Loam or Punishing Fire, flashing back critical card advantage spell like Kolaghan’s Command or Hymn to Tourach…the possibilities were endless.

In the first couple of matches, it became very clear that there is quite a bit of tension between Daredevil and the rest of the deck. The flashback portion of the deck doesn’t work well with Thalia, Vryn Wingmare, or Rest in Peace; this was further complicated by the fact that Rest in Peace and Daredevil tended to be good in the same matchups. It’s hard to curve out with the card given the other things you want to be doing. For example, if you cast Thalia on turn two, you can’t cast Daredevil and something like a cantrip on turn three. Similarly, trying to get value off of Daredevil by Vialing it in often forces you to either keep your Vial at two for longer than you would like or take a turn off from doing more proactive things.

No one of those things was enough to deter me from playing the Daredevil, but together, they made for a very awkward card. I was often faced with very difficult decisions when this card was in my hand, and I don’t mean that in a good way. For example, I have Thalia and three lands in play with Daredevil, Flickerwisp, and Pia and Kiran Nalaar in hand. Do I wait a turn to tick up the Vial to three so that I can get maximum value out of my cards at the cost of tempo? Do I activate with the vial trigger on the stack to give myself options for the three or four drop next turn, but decrease my flexibility if I draw a relevant card? Do I just tick the Vial up to three now to hold up Flickerwisp, but in doing so, prevent myself from really doing something with Daredevil this turn? This is the sort of non-obvious, line-warping tension that Daredevil creates.

I will say that just cantripping with Daredevil was better than I initially imagined. Between the fetchlands, Stoneforges, and Recruiters, we can actually do a pretty good job at getting only the cards we want off of Brainstorm and Ponder. In my initial evaluation of the card, I feared that the cantrips wouldn’t feel particularly good, but was pleasantly surprised by the outcome. When a deck that normally has very little card manipulation and selection gets to start increasing its consistency, that’s scary.

There’s another obvious issue with the card: it’s a hard-to-cast 2/1 with first strike at any time where you opponent does not have an instant or sorcery in the yard. In many popular matchups (e.g. Eldrazi and the mirror), you realistically might go through most or all of a game without getting a viable target for this card. That’s devastating. Additionally, there is some fear that an opposing Deathrite Shaman or Snapcaster Mage might decrease your ability to do what you want with this card. The inverse is true as well though, so you might get to blow out your opponent with it as they try to flash back a critical removal spell.

I went 20-15 with the Daredevil build, which is only 57%. That’s not great, as breaking even for a league on MTGO is a 3-2 finish (60%). Skimming my notes, Daredevil was responsible for very few of my wins. I’ll share most of them in the screenshot highlights at the end of the article, as many of them were hilarious or otherwise unusual wins. I managed to get one 5-0 finish with the build (the last league I opted to play with the deck), but otherwise it was a sea of 3-2 and 2-3 finishes. That’s not where I want to be.

Bringing it all together, here’s my final word on the card. Dire Fleet Daredevil is a card with high potential upside; it is situationally amazing and can win you games no other card can. This comes at the cost of a handful of deckbuiliding, sideboarding, and play restrictions. It is in many ways like Palace Jailer: it won’t always be good, but when it is, it will really pull you ahead. It suffers some consistency issues, but it is a 100% viable flex card slot. I personally will not be continuing to run it, as I value consistency over everything else in deckbuilding. If you’re interested in the card, here’s my 5-0 finish as well as Egget’s Legacy Challenge-winning list for you to use as starting points.

And now, in no particular order, the shenanigans I saw while playing this build: 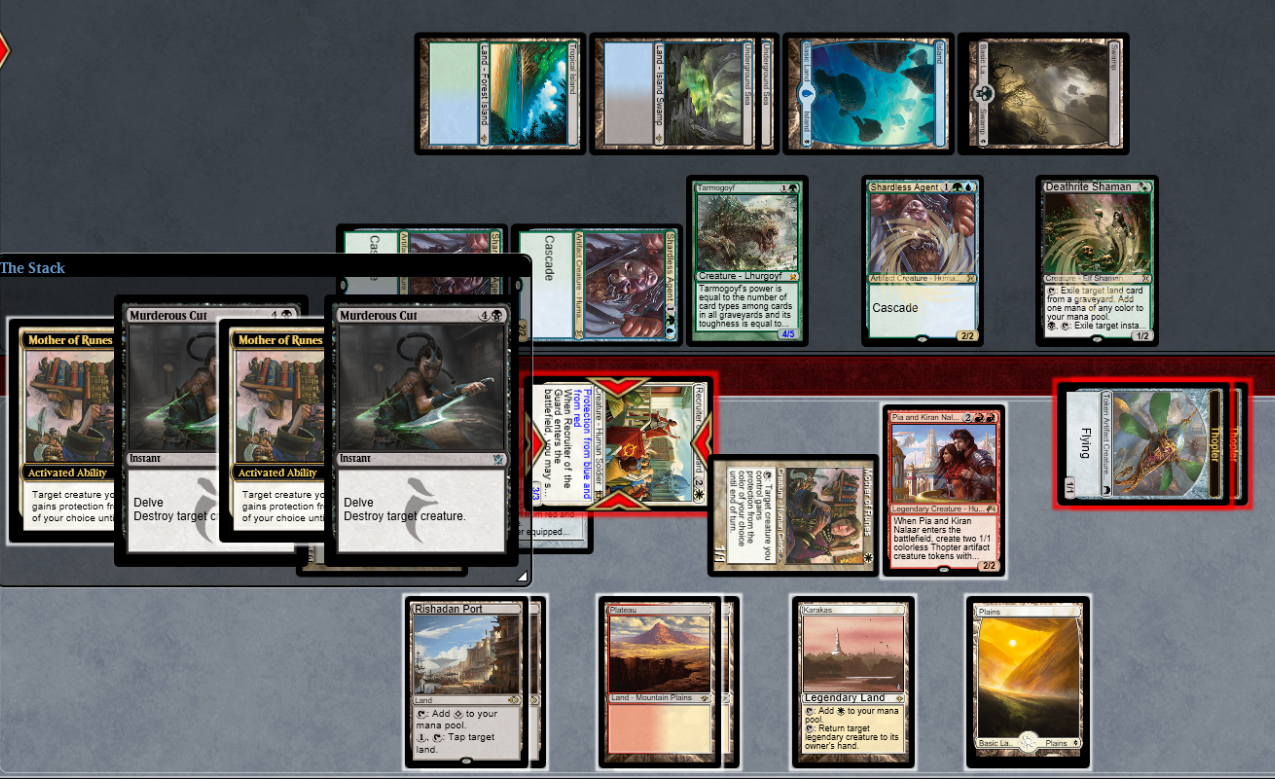 Have you even wanted something off the board so badly that you’d Murderous Cut it twice? Maybe. Was that thing a Recruiter? Hopefully not, because, boy, did I feel bad for my opponent! 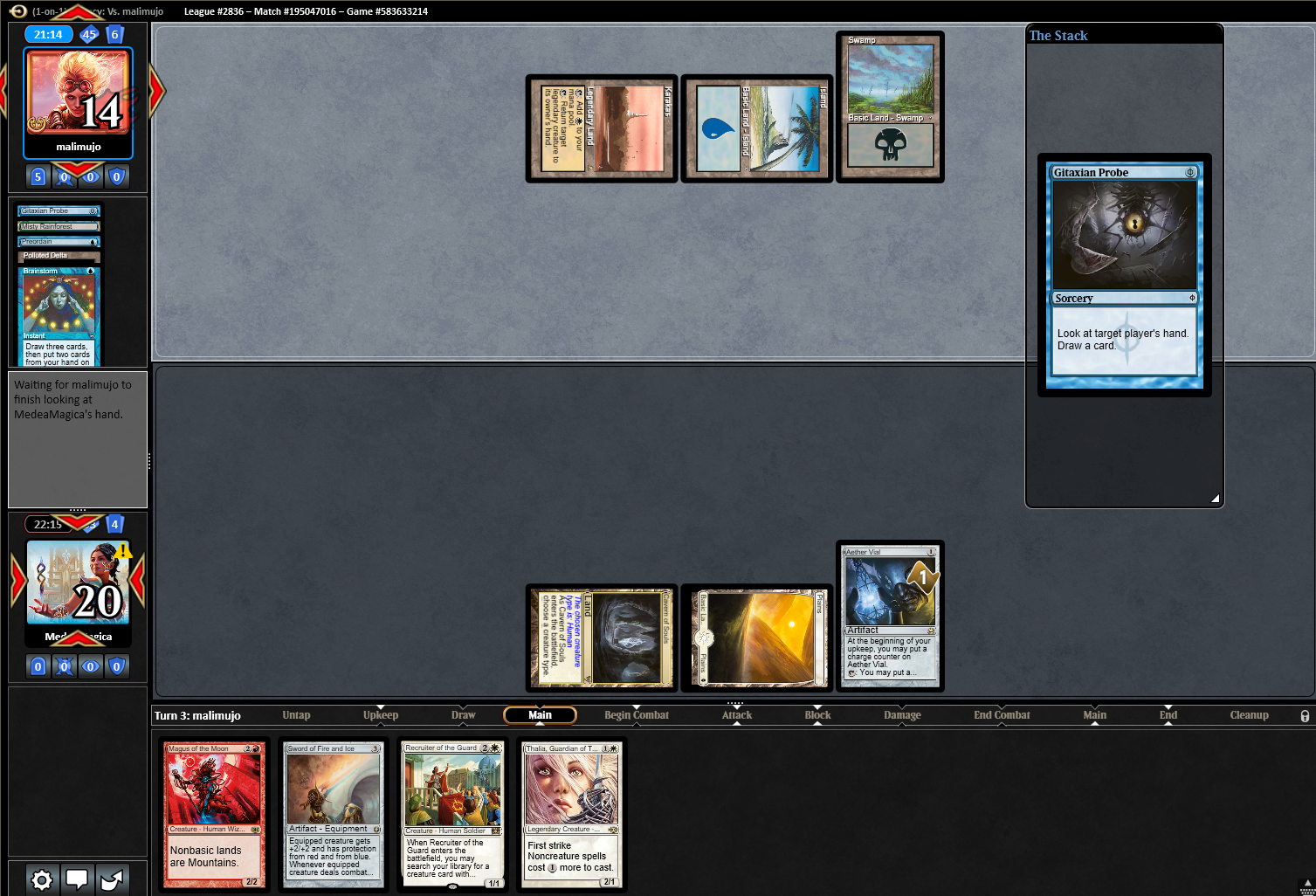 Malimujo is playing ANT here and has just used a Karakas to bounce my Thalia… Not pictured is me screaming at my webcam questioning their life choices. 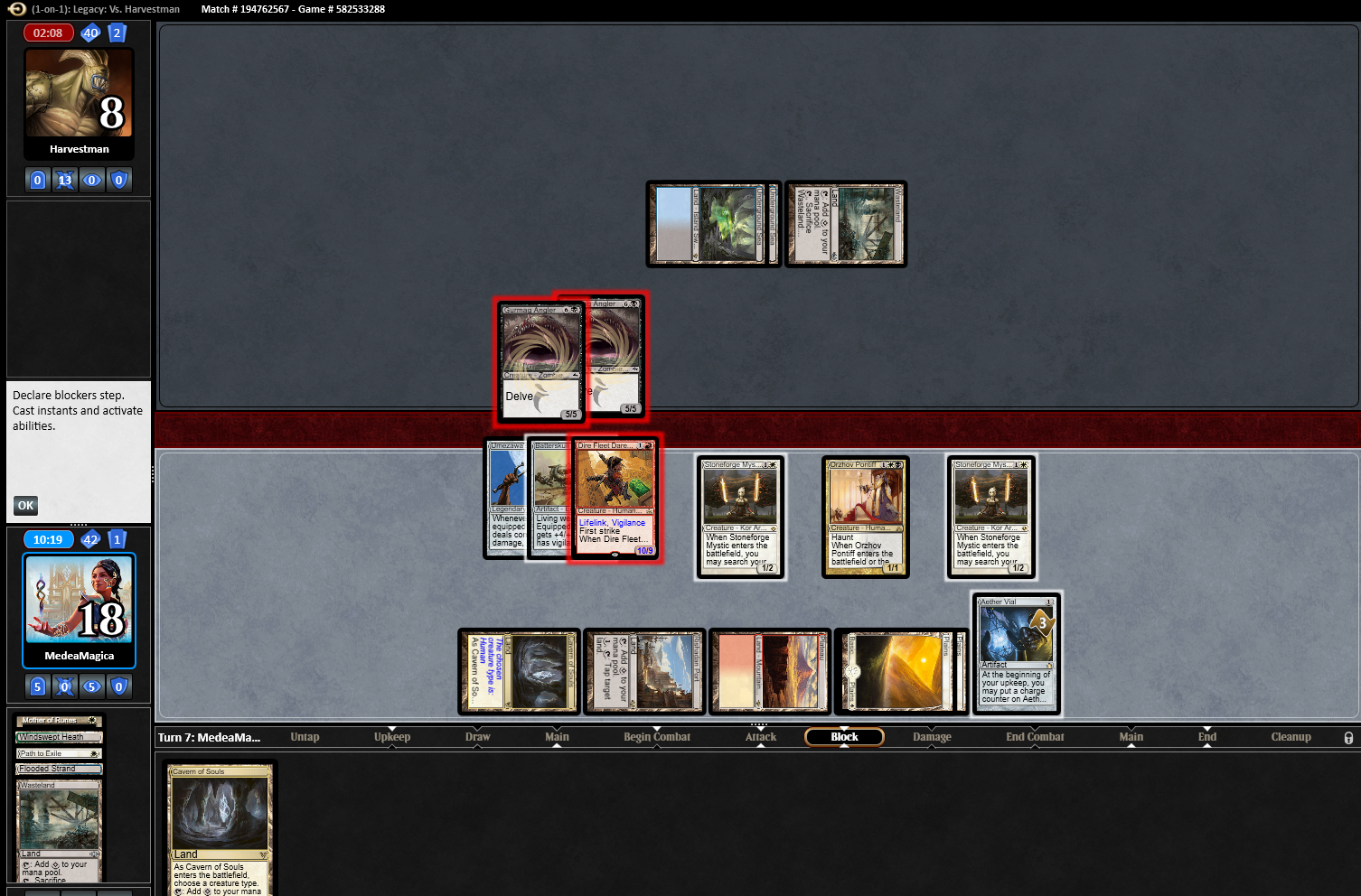 Sometimes Daredevil is just a guy with first strike. As pictured here, that can be just fine. 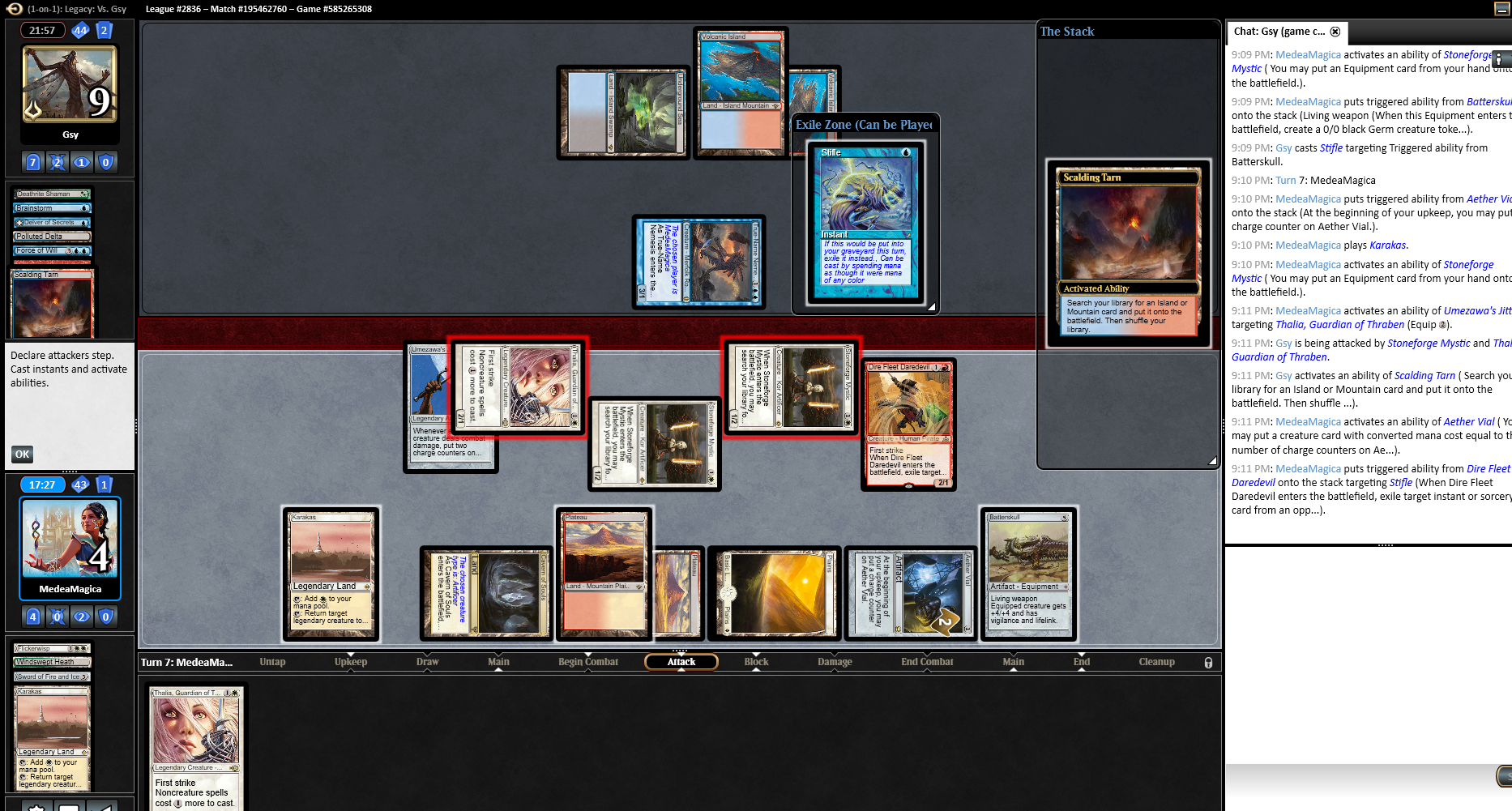 This situation was sweet. I knew my opponent had a Lightning Bolt from a Delver flip a turn or two back. I was in danger of being killed by True-Name Nemesis before I could stabilize with my equipment. Due to my Thalia, the Bolt would cost two mana. My opponent would have to fetch in order to blank my life gain this turn. When my opponent fetched, I Vialed in Daredevil and used a Stifle to nab their fetchland. That felt good. 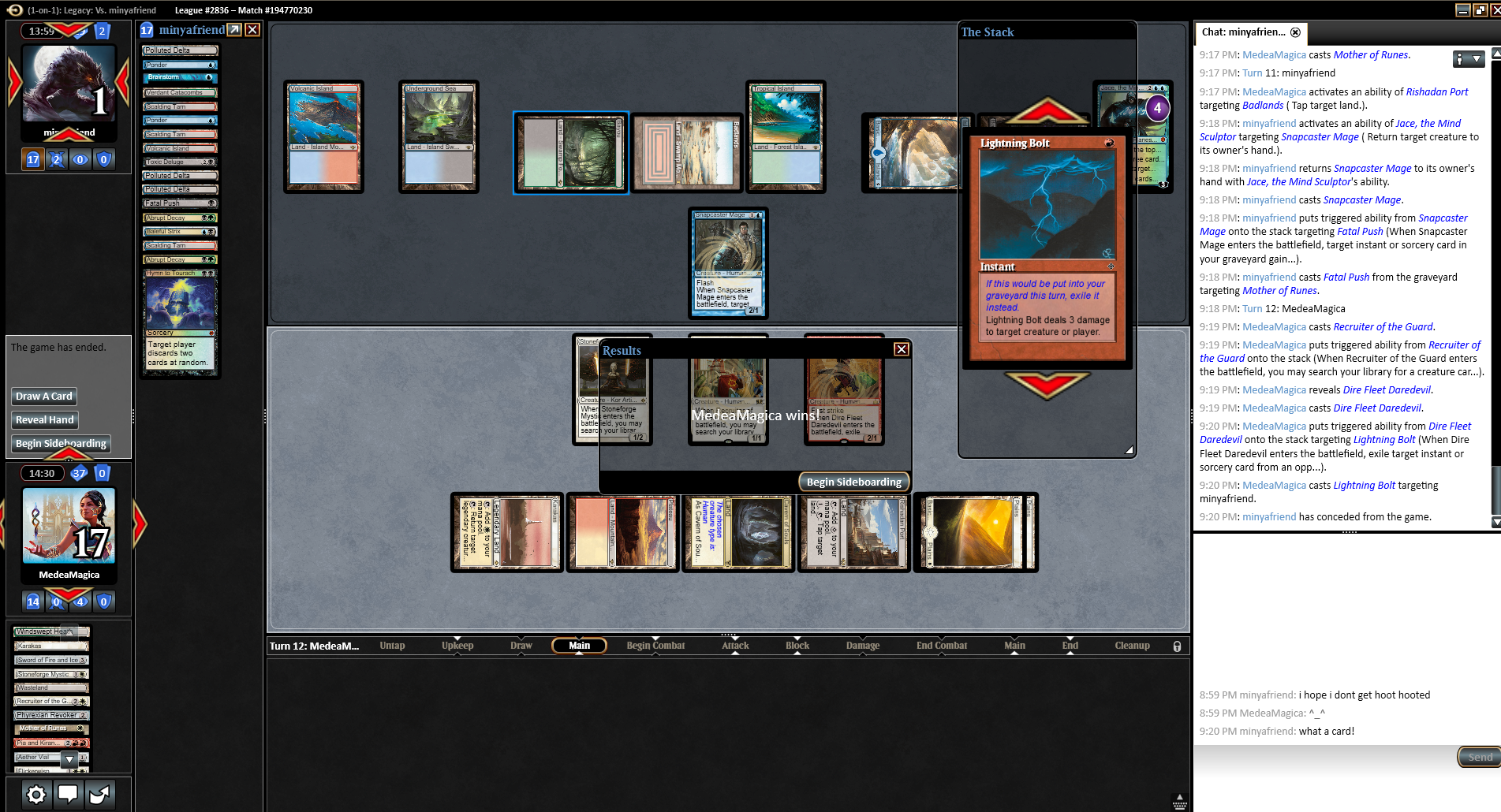 Against red-based decks, Daredevil serves as reach. My opponent thought they were safe behind their chump blocker and Jace… Wrong!!! My line this turn was Recruiter for Daredevil, Daredevil for Bolt. Not something my opponent was playing around… 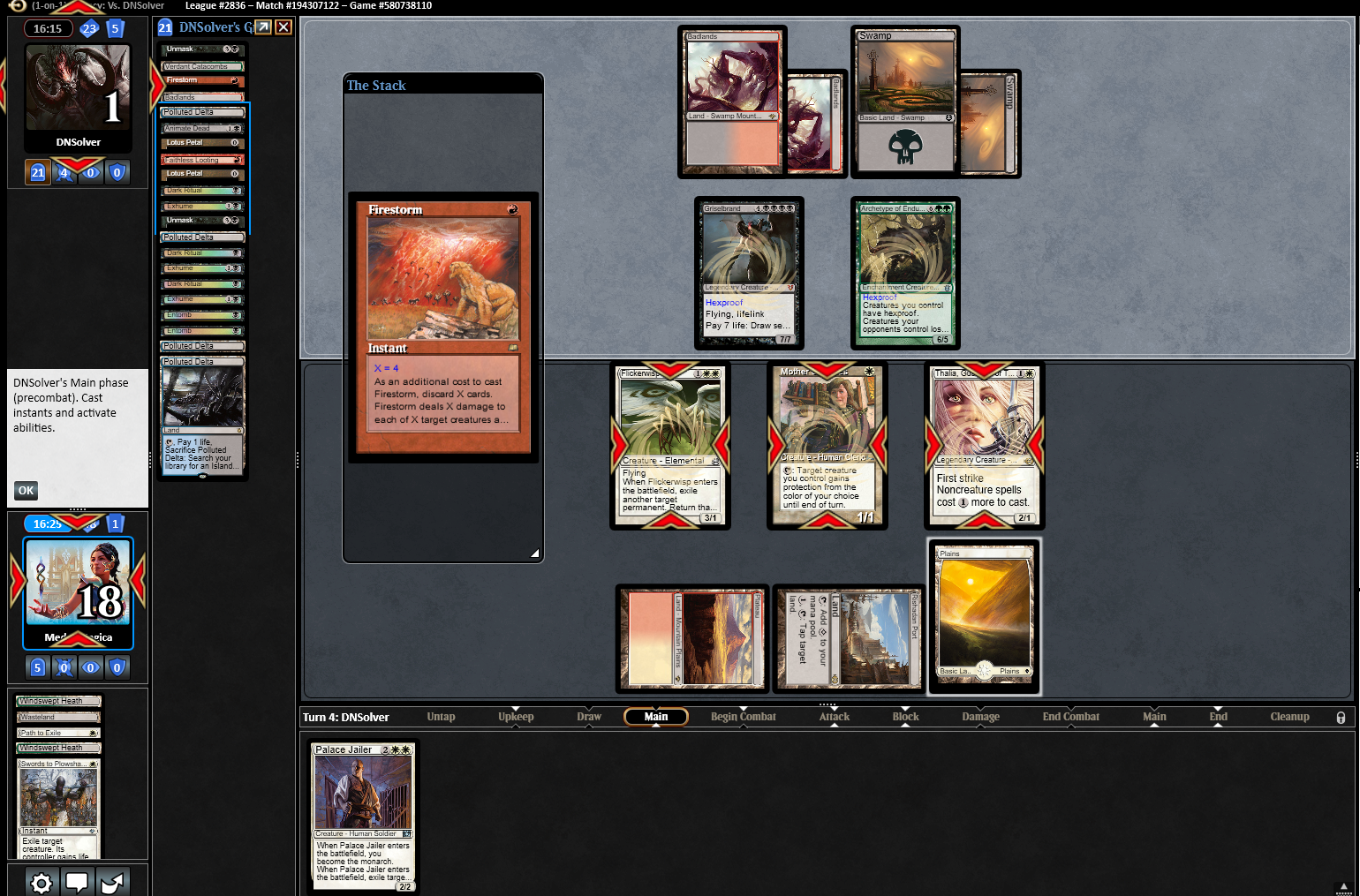 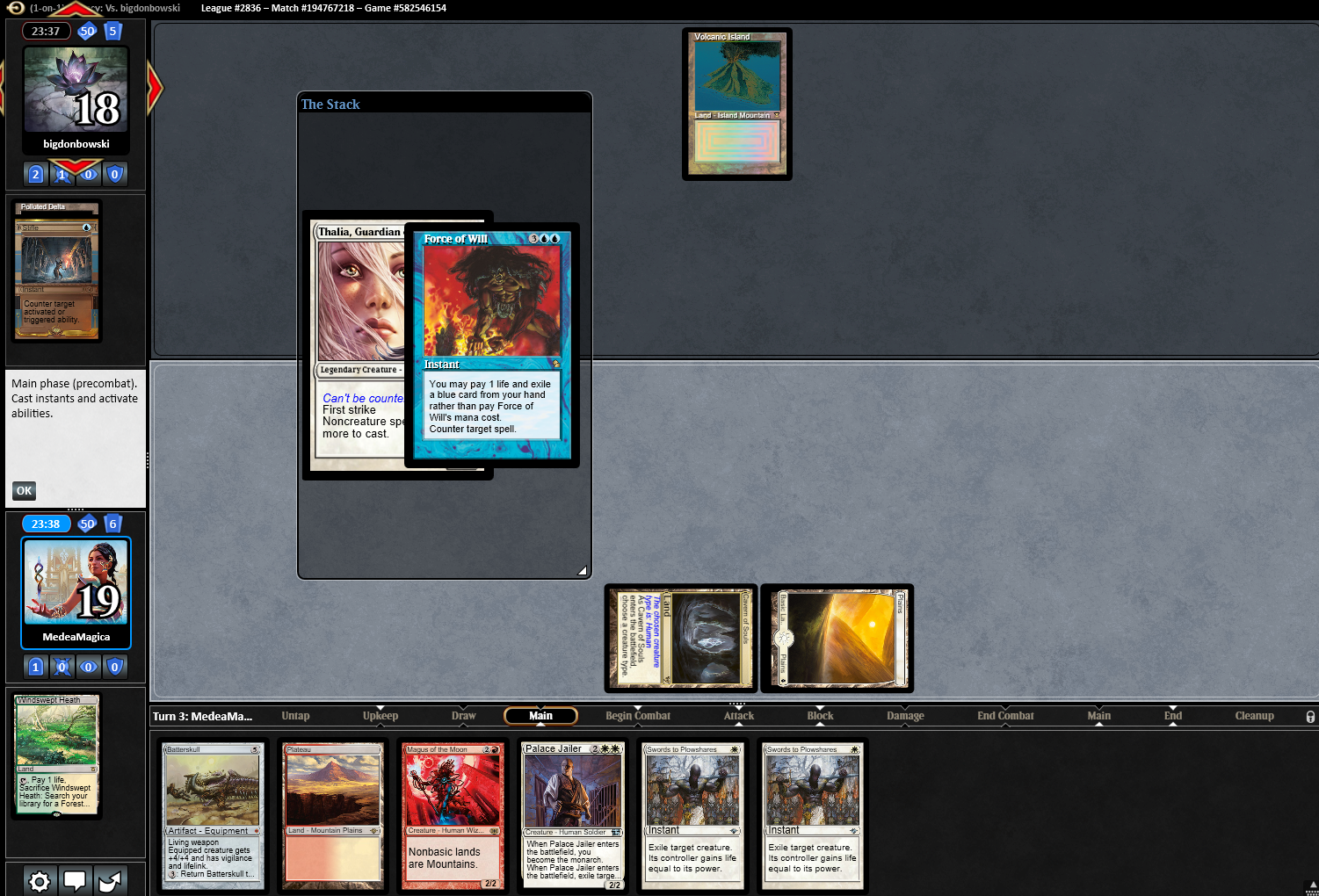 Ahhhh, sometimes you just have to let the mistakes soak in and enjoy them. My opponent conceded in shame after this particularly rough misplay. 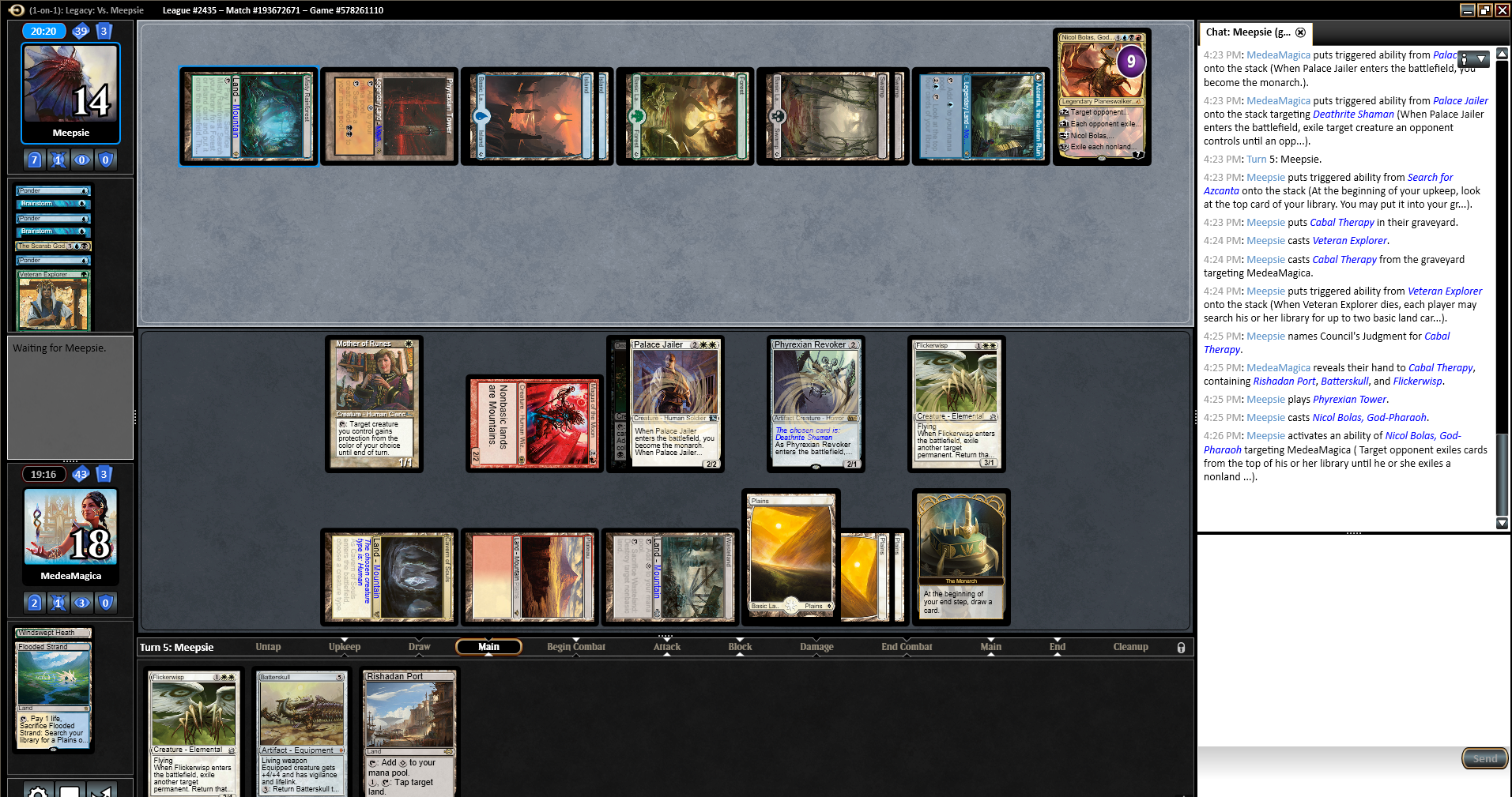 How do I always get paired against Nic Fit? Like, I guess it’s better than Elves, but it’s just odd. I can now check off Nicol Bolas, God Pharaoh from the list of cards that I’ve played against in Legacy. 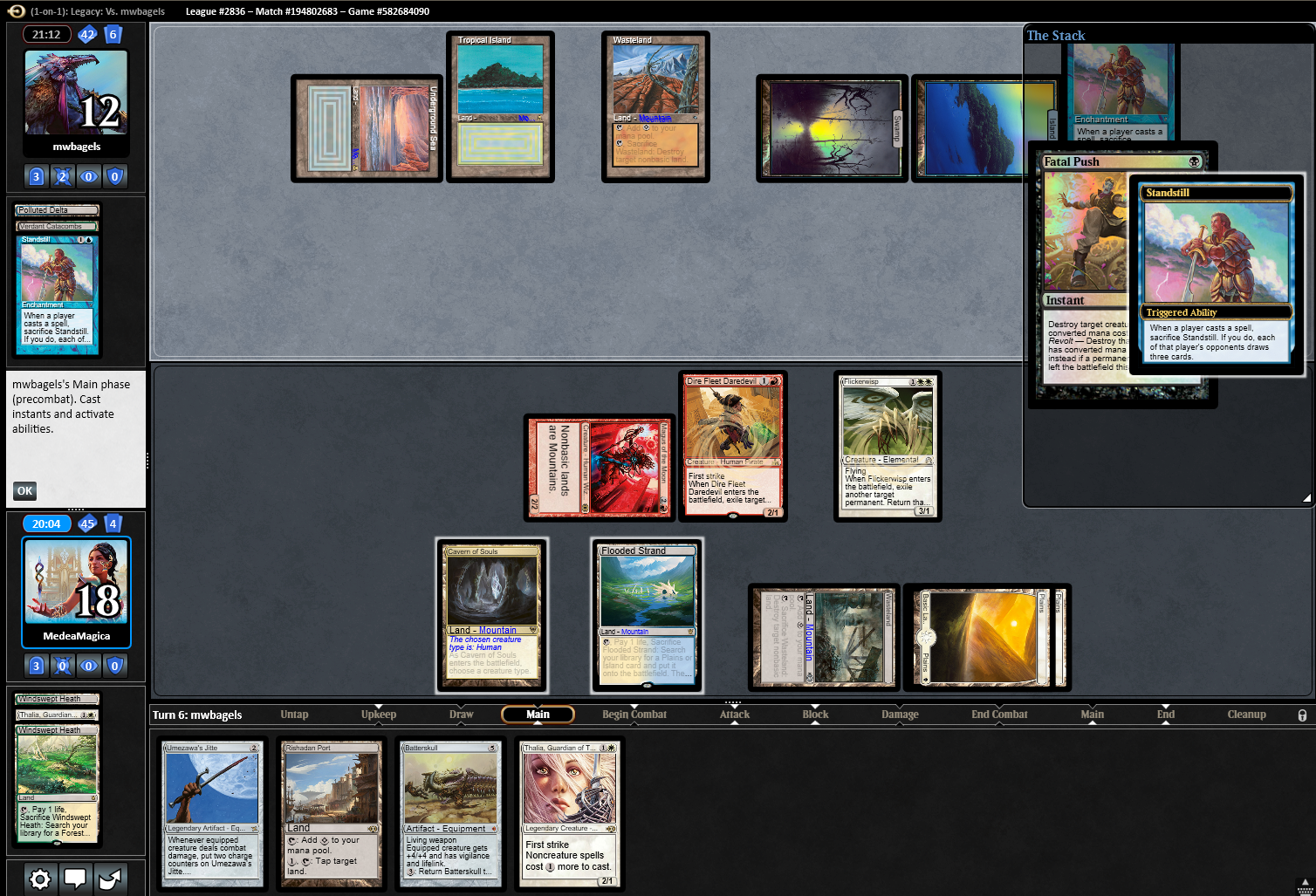 So this spot was really neat. My opponent couldn’t remove my Magus of the Moon and desperately needed to do so. They had to resort to casting a Standstill and then casting Fatal Push to get revolt by sacrificing the Standstill. It was a cool line, but my opponent was so far behind on board already AND they gave me three cards to get rid of the Magus. That’s a literal 5-for-1. Magus of the Moon, ladies and gentlemen.