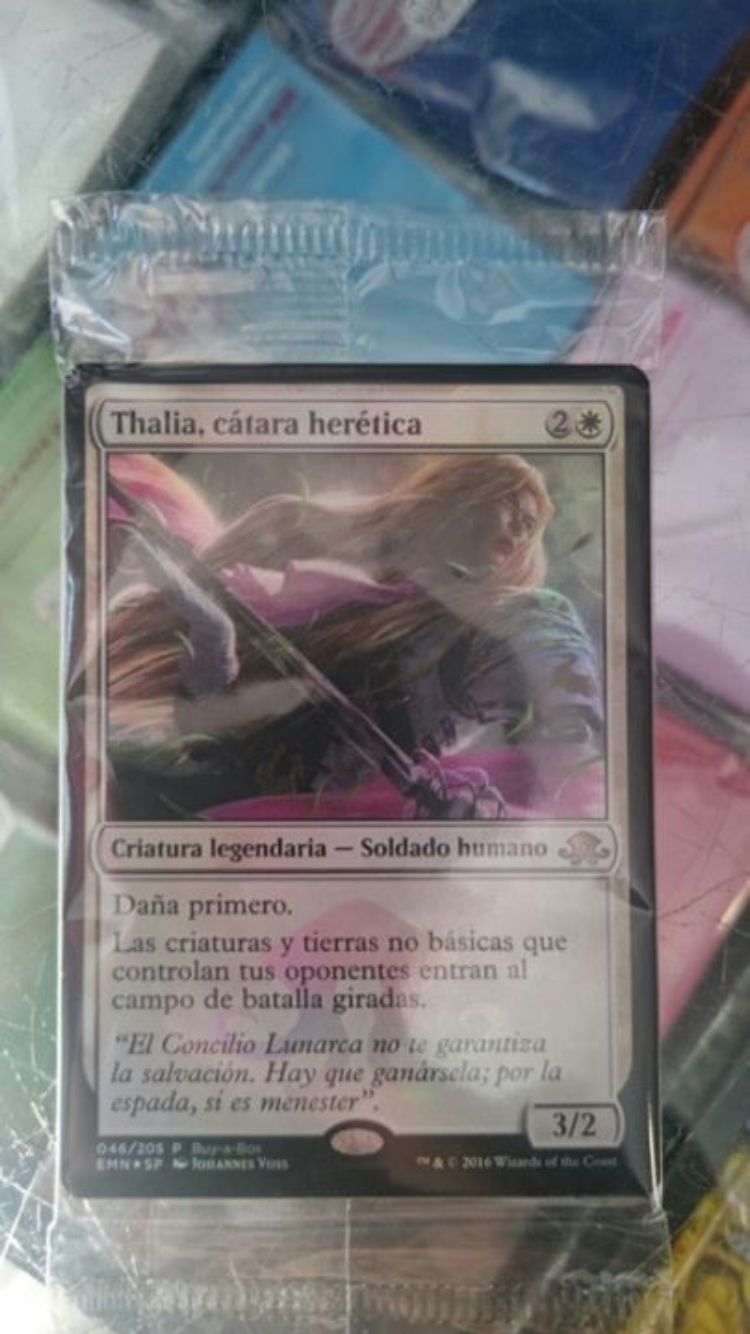 Welp, spoiler season (and my birthday for that matter) is starting out strong. Unexpectedly, we get the return of Thalia, and while this card doesn’t have quite the punch of the original Thalia, it does have some potential. Let’s look at the translation of the text:

Perhaps the closest comparison we can make to this card is Kismet.  It’s not a perfect parallel, but it is a pretty good approximation.  Kismet is not playable in D&T at four mana, as it really doesn’t have enough oomph to take up a precious sideboard slot; however, when you chop a mana off the cost and attach it to a relevant body, it does look a little more appealing.  Imposing Sovereign had a similar ability, but without a taxation element to it, it was largely relegated to standard aggro decks of various natures.

Our new Thalia lines up very well against the typical manabases of Legacy.  For many Legacy decks, all of their lands are nonbasic, meaning Thalia’s ability is a new angle of taxation. When their lands are fetchlands, this card feels pretty dirty.  Oh yes, that fetchland will enter tapped and proceed to fetch another nonbasic land tapped in many scenarios.  If your opponent actually has utility lands, this also does a good job of slowing them down as well.  You’ll get a chance to Wasteland a Gaea’s Cradle, Grove of the Burnwillows, Wasteland, Karakas, Maze of Ith, or Thespian’s Stage before they get to do their thing.  That’s pretty cool.  Did I mention that Flickerwisp on a land just got even better?  That’s right, if you Flickerwisp out a land on your end step, it disappears for their turn, returning to the battlefield tapped at their end step.  That’s essentially two turns of mana denial!  How sweet is that?

On top of all that, Thalia also makes opposing creatures enter the battlefield tapped.  Generically, this means you’ll be able to push damage a little easier, and connecting with equipment is a touch simpler as well.  Your opponent no longer can immediately make chump blockers with Young Pyromancer or Monastery Mentor.  While that is sort of cute, it is really just a delay, not any sort of true game-changer.  For a few specific matchups, this card is going to be a headache.  Decks that are trying to cheat in a fatty (e.g. Sneak and Show or Tin Fins) are probably going to lose an entire turn to this card, as if they want to attack with their creature, they will have to put it in on your end step.  Elves players are going to have a significantly harder time piloting a Glimpse of Nature chain through this effect, and it also means they will need more creatures in play to get an immediate Natural Order kill.  You also get to giggle at Reality Smasher for a turn before dealing with it.

Oddly enough, I’m actually most excited about this card for a reason I have touched on yet: its mana cost.  D&T has been plagued with a small problem for ages: it is a deck that wants to play WW creatures while also supporting 8+ colorless sources.  Players often try to trim some of the WW cards by adding Spirit of the Labyrinth, Aven Mindcensor, or Vryn Wingmare.  Those cards inconveniently all eat it to sideboard cards like Sulfur Elemental and Dread of Night.  Thalia provides a very relevant ability alongside decent stats with a desirable mana cost…oh, and she’s also Legendary, meaning the usual Karakas shenanigans apply.  Time and testing will tell, but I believe this card has a potential future in the flex slots of the deck.