I love Monster Train. This isn’t sponsored content. I wasn’t paid to promote the game. I’m just hooked. I’m about 29 hours deep after having the game for a week, and I expect to sink hundreds of hours into this game. Accordingly, I figured it was time to do more than just Magic: the Gathering content on this site and do a little bit of Monster Train strategy from time to time. Today I’m going to cover some fundamental strategy for deckbuilding and roguelite games before launching into more nuanced strategy and tips.

Get Stronger
So this sounds silly to write, but your goal is to get strong enough to defeat the final boss. Your resources need to be used in a way that works towards that goal. Your Pyre health, for example, is a resource. It’s absolutely fine to take some pyre damage during a fight, especially if that is going to let you clear a trial. By clearing a trial, you’ll get additional resources that will make the rest of the run easier. It’s often a mental trap to think, “I shouldn’t let the pyre get hit, because I lose if it dies.” Remember, you can win a run with a single health remaining on your Pyre! The Pyre Remains event is also common enough that you’ll usually incidentally restore at least some pyre health on any given run.

Taking Risks
Playing too safely is sometimes a recipe for disaster. If you avoid too many trials, you may find you’re not quite going to have the oomph you need to make it through the end game. Similarly, sometimes it will be correct to do something that hurts your deck now, but has important long term prospects. Consider this bad boy: 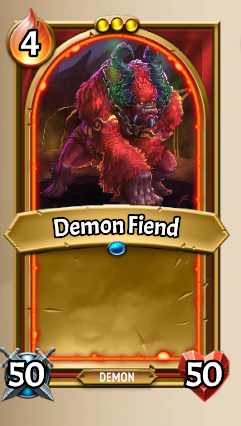 Would you take this as a pick in circle one? What if you were to obtain an artifact like Volatile Gauge (which randomizes costs of cards) or Forever Flame (decrease unit cost by 2). What if you get some cards that give you additional ember? Sometimes you can take a risky pick with high upside if things go your way. Sometimes you’ll want to think a bit outside of the box and keep an open mind.

Deck Size
You only get to draw so many cards each turn. Some of your cards are going to be significantly better than others due to upgrades at the merchants and the natural differences in power level between cards. You want to draw your best cards early and often. This usually means that you should aggressively remove your starting cards. While Train Steward might get the job done on the early floors, it looks a little sad compared to the creatures you can draft. Similarly, while a base card like Torch might be great a picking off early enemies, it’s unimpressive when you’re trying to chip away at Seraph come the end game. By a similar logic, if you’re already comfortable with where your deck is at, you don’t need to keep adding cards to your deck- take that gold and don’t dilute your deck!

Flexibility and Problem Solving
You’ll want to remove cards so that you can more consistently execute your gameplan and create a more focused deck…but, that doesn’t mean that your deck should only be doing one thing. If you deck becomes overly specialized, you may find that although you’re absurdly powerful in a vacuum, you lose to specific threats. If you’re too heavily focused around damage spells, Spellshield can really give you problems. If your units all have low starting health, spikes are scary. You should have plans for dealing with different types of units and waves. Can you answer a heavily armored unit? What about problematic back row support creature? Are you prepared to fight the version of Seraph you’re going to encounter? These are things that should be on your mind, and your should build your deck in a way that lets you prepare for the fights and creatures that will give you the most trouble.

Bosses and Plotting Paths
While the game very clearly telegraphs what version of Seraph you are going to encounter, it’s much more subtle with Daedalus and Fel. You can actually tell which variant you’ll face based on the map symbols. Check out this image for the details.

On that note, you can use the map (or scroll down) to plot out a few different circles of hell at the same time. You can often pick more efficient paths if you know what is coming later. For example, you might not want to visit a Merchant of Magic two floors in a row, so you can pick paths that avoid that situation. Similarly, if you know a Hellvent is coming in the next circle, you can upgrade a card in your current circle to make the duplication event next circle even better. As a side note, the Merchant of Magic always has a cost reduction option, even after you reroll. Accordingly, at any Merchant of Magic, you *know* that you can reduce the cost of a card by 2 if you can afford it. Taking advantage of this can create some pretty busted cards and even more ridiculous situations after a Hellvent.

Capacity
Your normal capacity is indicated by the yellow dots above a floor of your train. You can’t place units on that floor if they exceed your capacity. However, certain effects like Ascend and Restoring Retreat allow you to “overfill floors.” This will show up as red dots for that floor. Using these effects can allow you to create one “super floor” where you do most of your damage and make your final stand against the boss. Notably, you can only have seven units on a floor, even if you are dancing around the normal unit capacity limit somehow.

Decisions and Learning
Everything matters in this game. Your decisions over time really compound to give you advantages and disadvantages based on your decisions. The biggest piece of advice I have for anyone at this point is simply, “learn.” If you’re not sure why a unit is dying, watch that floor on regular speed to see if you misunderstood a triggered ability or something (as a side note, in addition to the speed settings in the upper right corner of the screen, you can also right click to increase animation speed further). Think about your order of events on the map. Should you do the Caverns event before or after your other options? How does your evaluation of certain cards change based on what bosses you have to face this run? There’s so much to think about, and that makes this game have real staying power to me.

I hope some of this was useful to you all. Beginning on Monday (6/1) I’ll be posting a Monster Train run to my Youtube channel each day at 8:00 am Eastern Time. If those end up doing well, I’ll plan on making it a long-running series, write more articles on things like clan specific strategy, and make an effort to stream Monster Train more regularly.