While usually my articles are very strategic and sing the praises of Sword of War and Peace or Mirran Crusader, I thought I’d do something a little different today. To round out the year, I thought it would be fun to highlight some moments from my online gameplay, showcasing some interesting scenarios and odd things that occur on MTGO. It’s story time!

There are times when I feel like all hope is lost. Times where I have no idea how I could possibly win. Yet, I play on. You see, sometimes the random number generator blesses me with a win I don’t deserve. My ANT opponent here had two Dread of Night in play. That left me with almost no ways to do any damage to my opponent. It was time to cross my fingers and hope for Phyrexian Revoker to be in the top couple of cards of my deck. Luckily for me, my opponent got overly aggressive with an Ad Nauseum. They were at 4 life. They couldn’t kill me this turn, so they kept going when at five life; in reality, they could have taken their sweet time. They flipped a Past in Flame and Tendril of Agony, so the kill was pretty guaranteed the next turn. Lo and behold, they flipped a Dark Petition (a one-of in this deck and the only expensive card left in the deck) and died. That’s how to win through double Dread of Night. Skill. Pure skill. 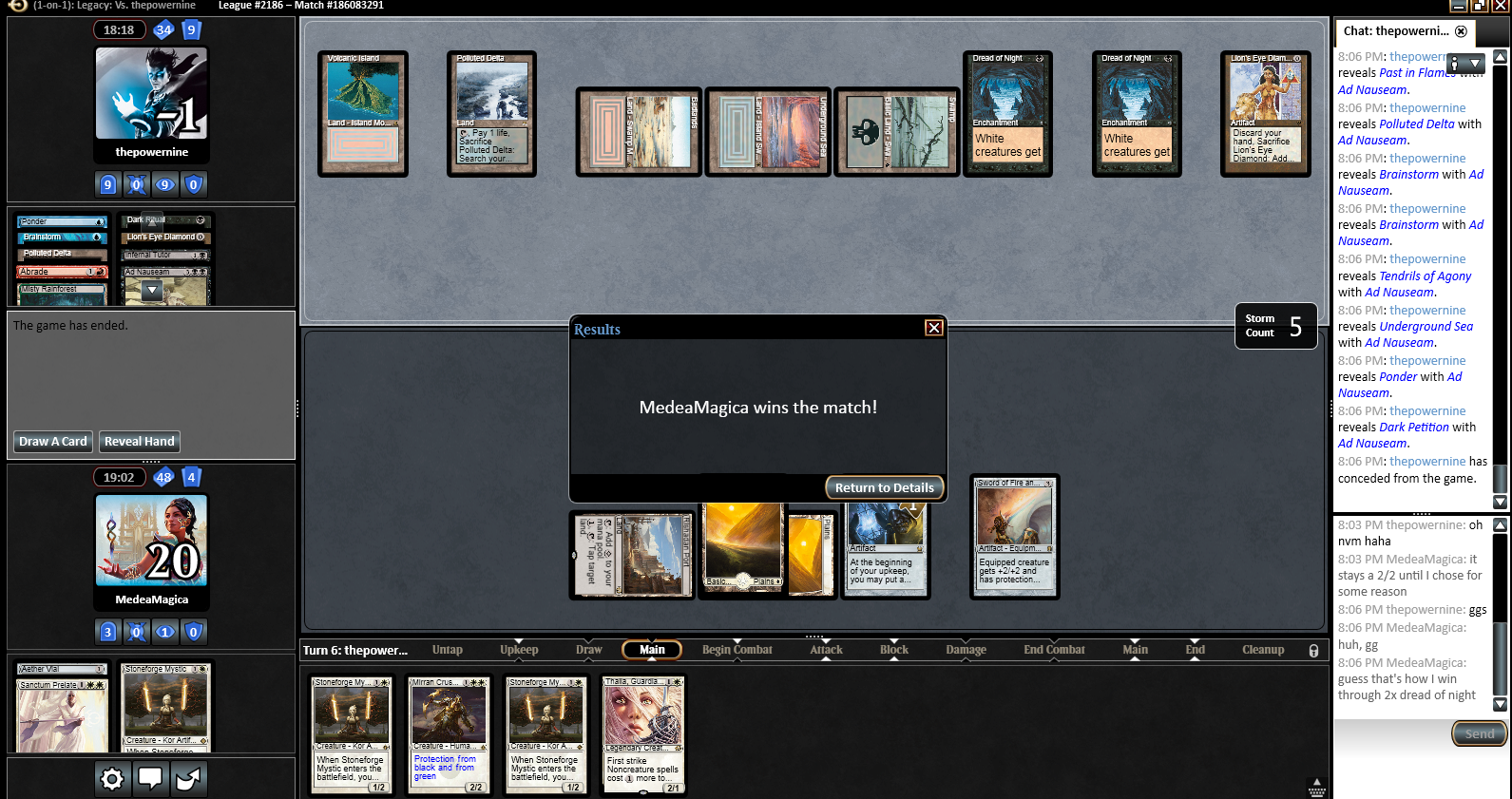 It’s really easy to forgot that cards matter. I know that’s weird to say, but hear me out. In complicated board states, it’s often best to focus on the key information. Zero in on what truly matters, ignore everything else until it becomes relevant. Well, that can be best, if you are correctly valuing what matters… For a 4 Color Loam player, Chalice of the Void on one shouldn’t be relevant to their actions; after all, the deck doesn’t play any one drops in many cases or just summons them with Green Sun’s Zenith instead of casting them! My opponent was focused on the Thalia on board here that they forgot about the Chalice. Paying 2 mana didn’t bring Chalice to mind until it was too late… Be sure to reevaluate the board state from time to time. Things that once weren’t relevant can become relevant once circumstances change. 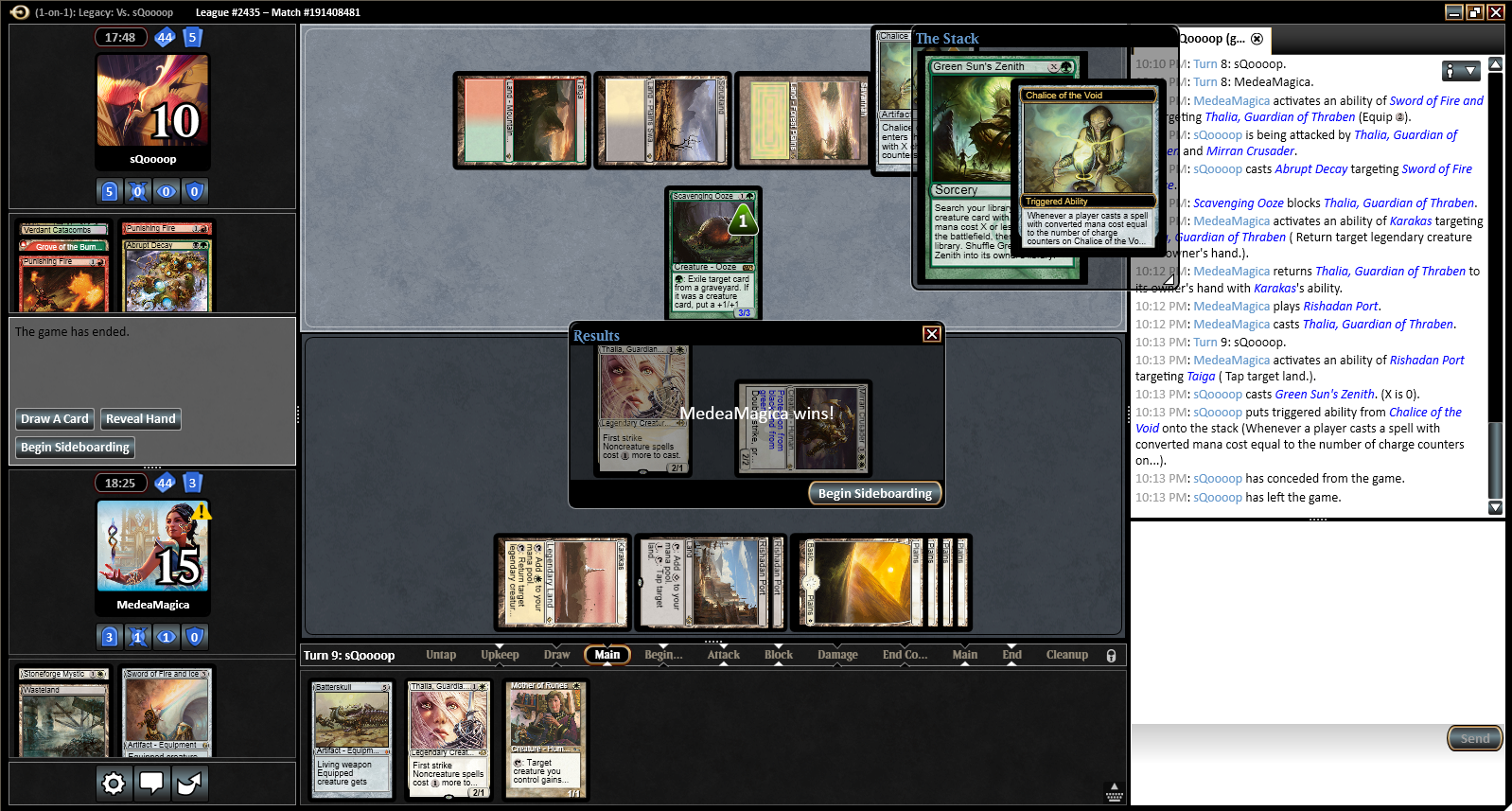 Sometimes I come across really weird scenarios, the sorts of things that haven’t come up in years of playing the deck. It’s often easy to work my way through these scenarios as they occur, but sometimes I miss things. Here’s one time where I messed up. My opponent had a Chancellor of the Annex in play and had revealed it at the beginning of the game as well. My opponent cast an Exhume to try and get a Griselbrand in play. I was planning on just passing the turn, dealing with the Chancellor with spot removal and bouncing the Griselbrand with Karakas. I had everything under control. I hit okay and then swore very loudly. I realized that I could cast Containment Priest into the double Chancellor trigger, ridding myself of the one from the beginning of the game. The Priest would hit the graveyard to return momentarily to the Exhume. I then could have used Flickerwisp as a removal spell as well. My previous plan worked just fine, but I absolutely took the wrong line because I didn’t take enough time to really think through the situation. There were so many variables to focus on that I failed to see that the Chancellor trigger could actually be beneficial to me. I cost myself some tempo and mana, but this absolutely could have been a game-losing scenario in other circumstances. 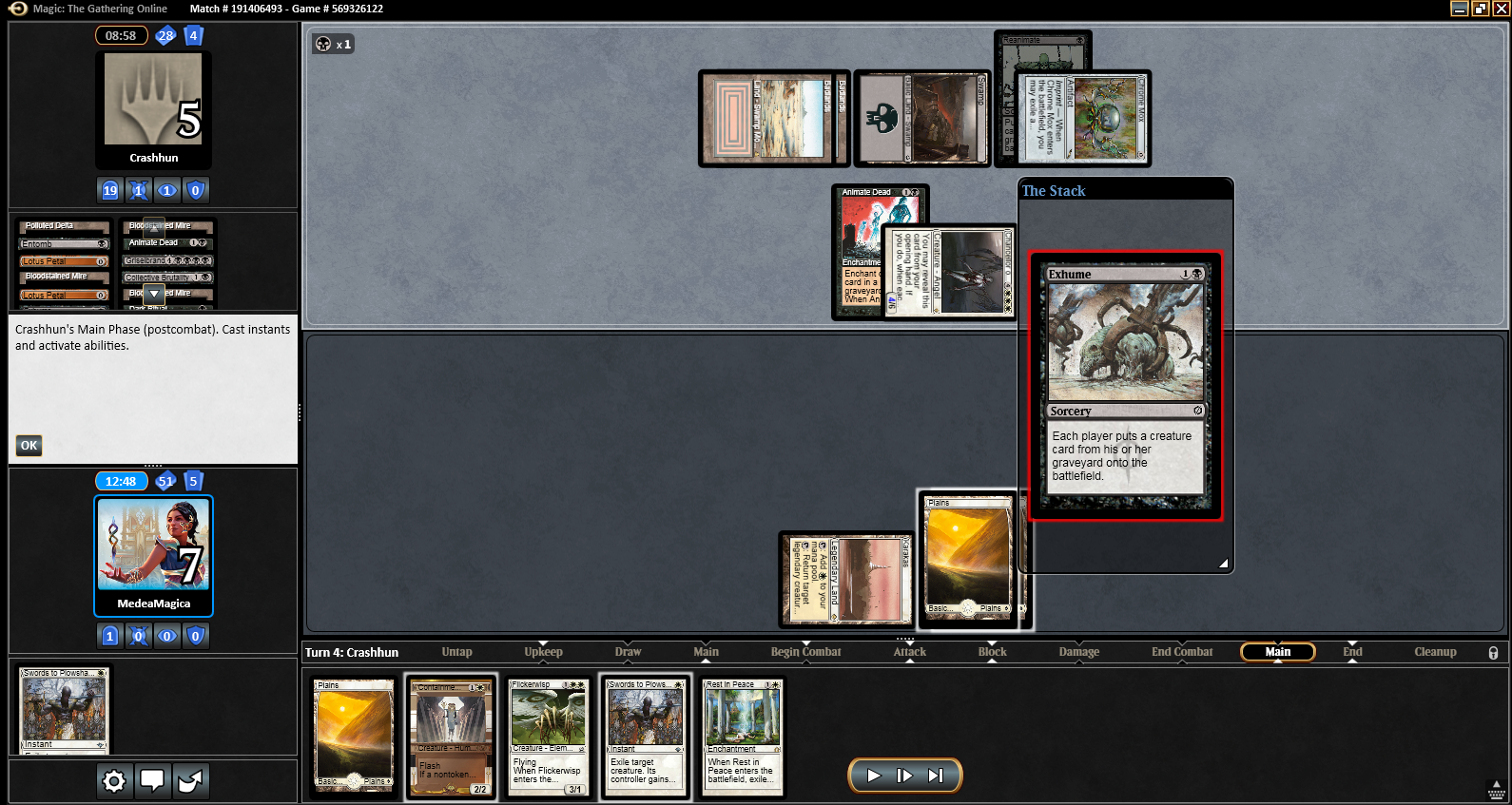 MTGO is a hell of a drug. It’s just good enough to keep you coming back, but it has some serious issues and quirks. Earlier today I disconnected and the client didn’t bother to tell me for 5 minutes; I thought my opponent had gone to the bathroom or something. Wrong. I finished that match with like a minute remaining. I recently played a match against Bryant Cook where he misclicked/lagged and produced a bunch of white mana while playing TES; somehow he was able to undo most of his turn and fix that, which baffled both of us. Sometimes the game lags causing you to do something beyond stupid. This screenshot captured one of the worst ones I’ve seen. My Lands opponent copied their Tabernacle at Pendrell Vale instead of their Dark Depths. Tabernacle, like Dark Depths, is legendary. Instead of creating a 20/20 tentacle monster, they just blew up one of their lands at a critical moment. 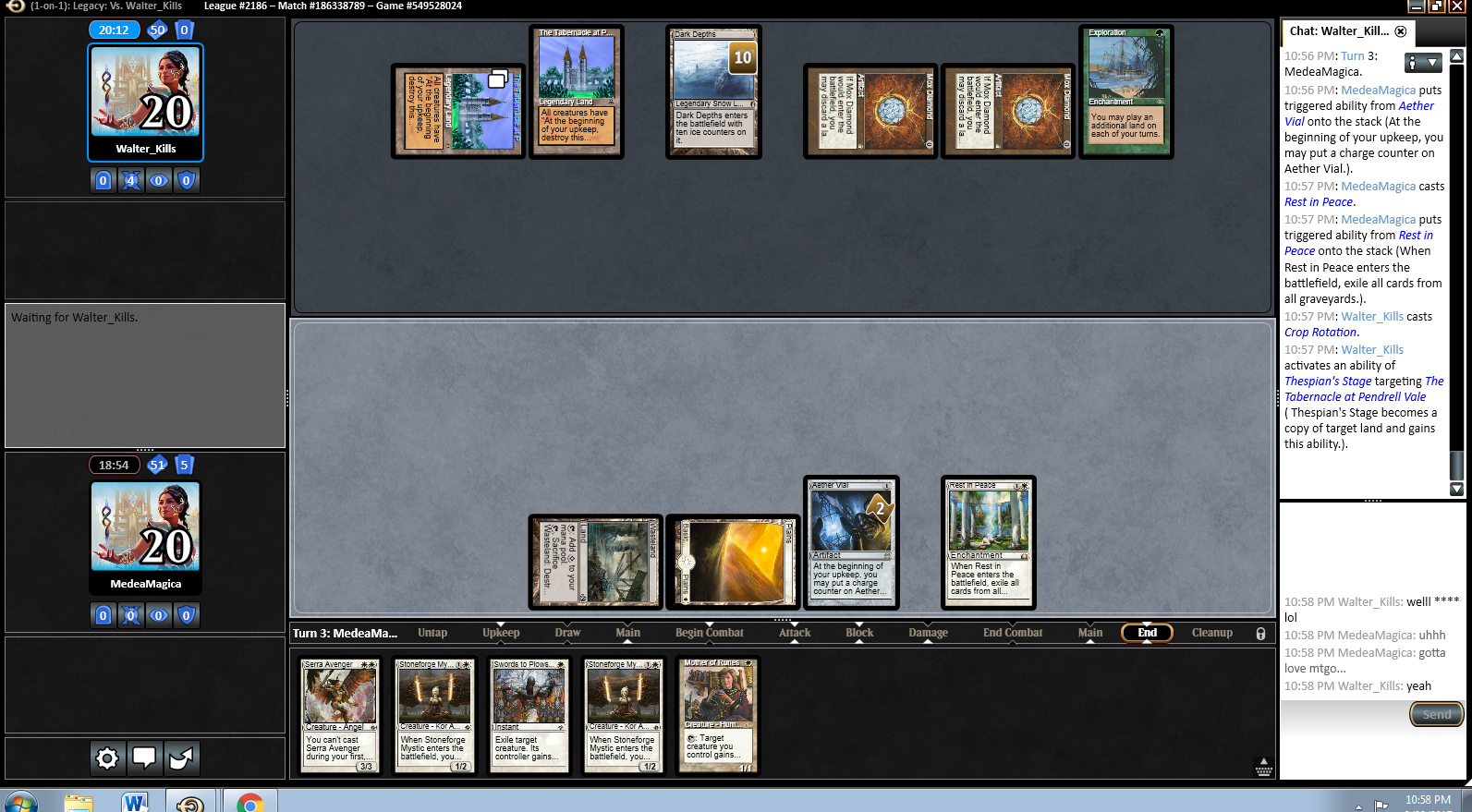 When I bought into MTGO, I expected largely to play against top tier decks all the time. Most people who buy in to Legacy on MTGO probably already own that deck on paper. It’s a real commitment to acquire a Legacy deck both on paper and online. The diversity of MTGO surprises me from time to time, I do admit. There are still brews and fringe decks all over the place. Here’s a match where an interesting Mono Black Control deck is beating me down with a pair of Vampire Nighthawk. That’s sweet, I’ve got to admit. Vampire Nighthawk is my favorite Magic card and the first single I ever bought. I’ve been wanting to throw that card in a B/W Taxes list for ages, but the mana doesn’t really work too well for double off color, non-human splashes. 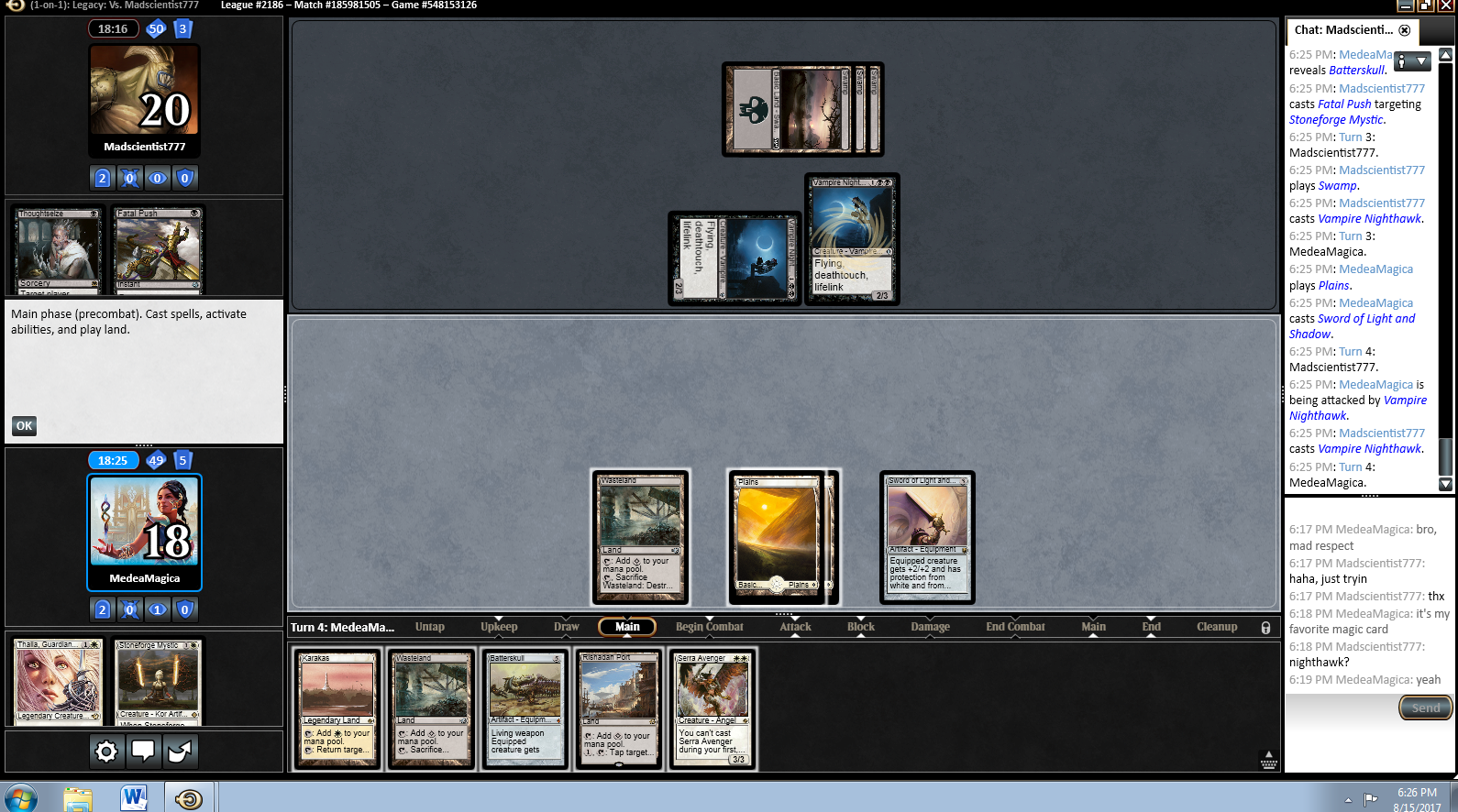 It’s really easy to experiment with sideboard tech on MTGO. Most non-relevant cards cost pennies. No need to shell out a few dollars to try out some tech for your local event. This sometimes leads to really odd and interesting sideboard cards making an appearance. Steel Hellkite out of Eldrazi’s sideboard was not something that I expected. I’m really glad I had the removal at that exact moment. It would have destroyed everything I loved every turn for the rest of the game. I’m not sure that it’s a good use of a sideboard slot since it doesn’t work with the Eldrazi-specific lands like Eye of Ugin and Eldrazi Temple, but I was certainly afraid! 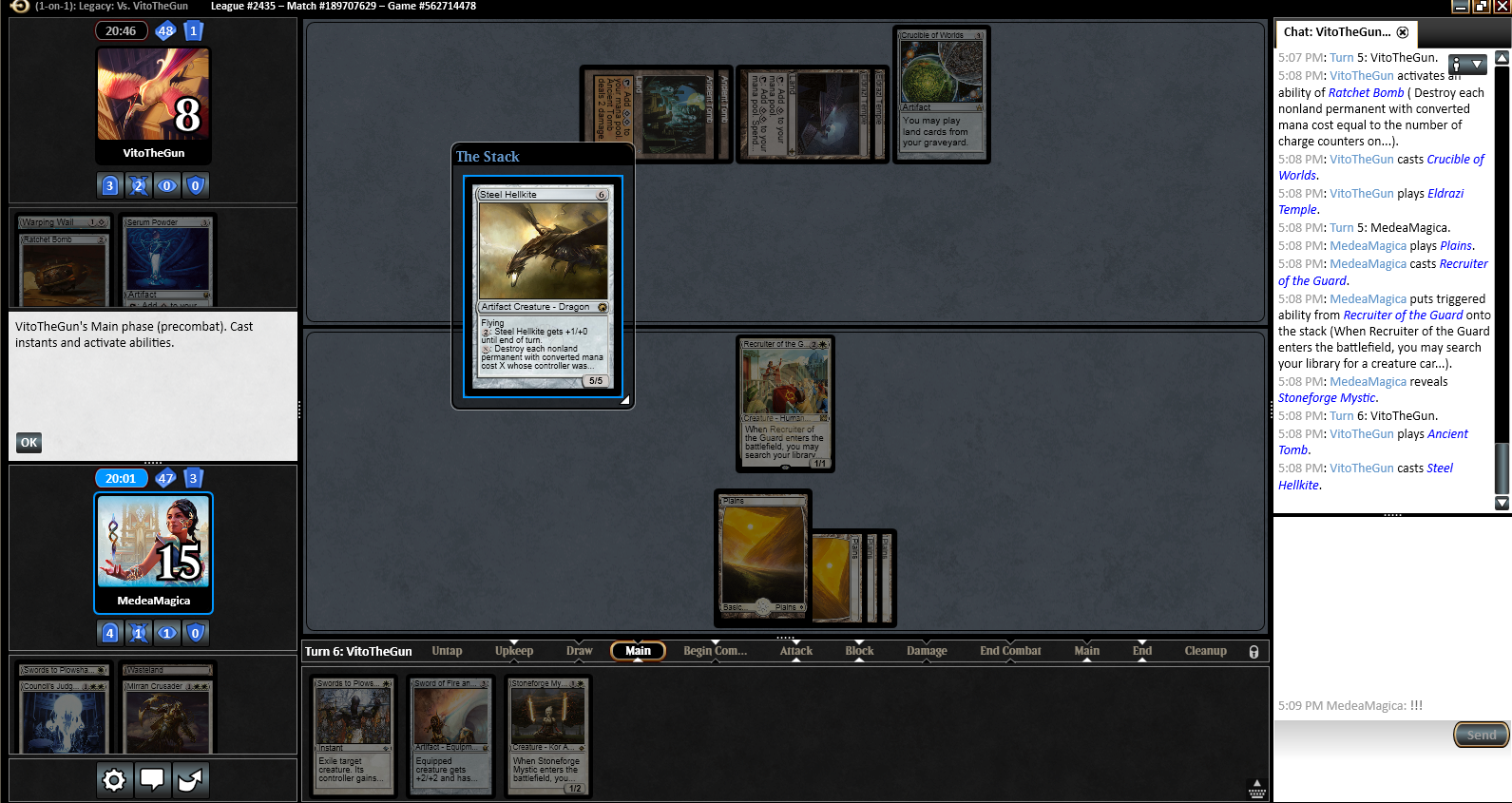 Have you ever thought to yourself, “Well, it can’t get much worse?” I try to avoid that phrase. Undoubtedly, I find a way that it can get worse. While Red Prison is a great matchup for D&T, sometimes…well, the shit hits the fan. My opponent assembled the dreaded Bottled Cloister and Ensnaring Bridge lock. That’s fine, once I get a Flickerwisp, I can blink the Bridge and attack with Mirran Crusader equipped with Sword of Fire and Ice. Another wild Ensnaring Bridge appears! Uh oh, now I need two Flickerwisps… Some Chalice of the Void appeared on one and two, limiting my ability to do things. Then the Chandras rolled in. I finally conceded to Chandra, Torch of Defiance, Chandra, Pyromaster, and Chandra, Flamecaller. The changes to the Planeswalker rule results in some wacky boardstates in Legacy. 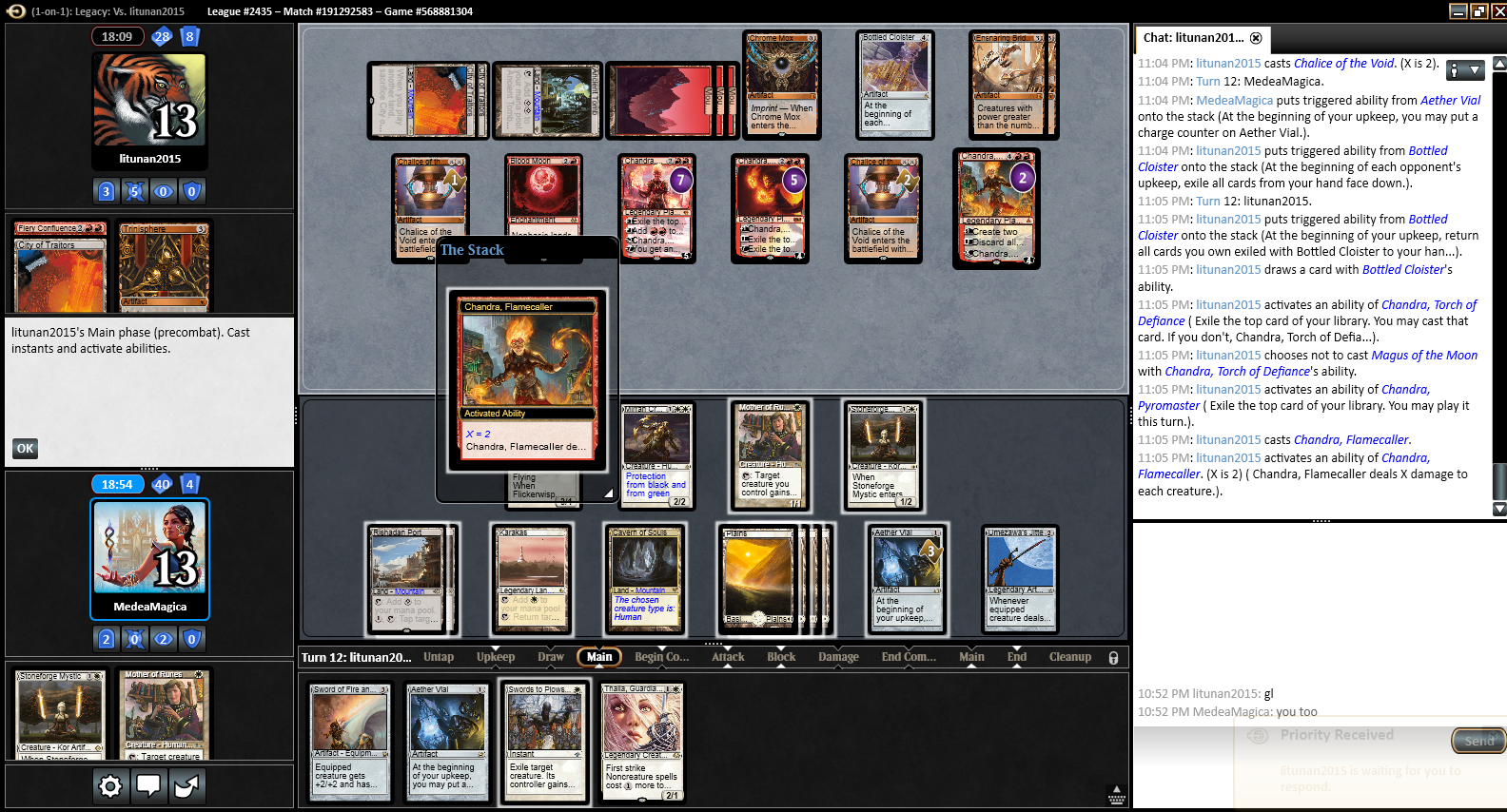 Speaking of… MatsOle has stomped my face in a few times with 4 Color Loam recently. His list features Liliana of the Veil, Liliana, the Last Hope, Garruk Relentless, and Ajani Vengeant. Poor ol’ Phyrexian Revoker can only do so much work! I didn’t think to get a screen shot of another game where I lost all of my permanents to a combination of three planeswalkers, but this one should give you a good enough idea of what the matchup feels like against this exact 75. Garruk Relentless, Liliana of the Veil, Liliana, the Last Hope, AND The Tabernacle at Pendrell Vale! Bleh! 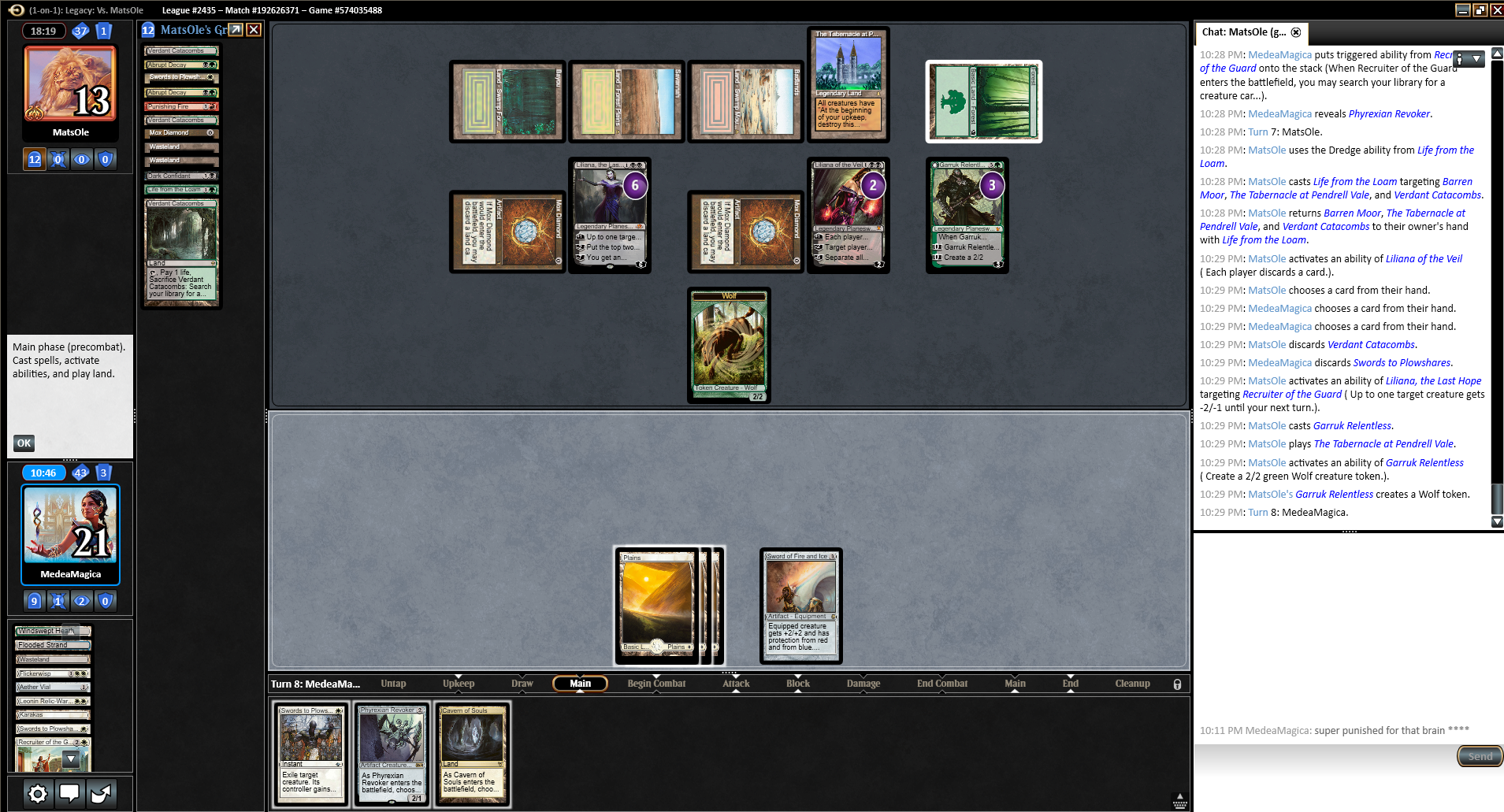 It can be tricky to evaluate what deck your opponent is playing. I can usually do it after a turn or two, but, sometimes, I’m lost. My opponent started the game with a Badlands and Cabal Therapy. Grixis Control with Young Pyromancer. They then played a Pernicious Deed. Uh, Jund Nic Fit? Then they played a Sneak Attack and then threw an Emrakul, the Aeons Torn and a Worldspine Wurm at me. Uh, Jund Nic Fit Sneak Attack? I don’t have a graceful name for this deck and I was a little confused about how to sideboard. 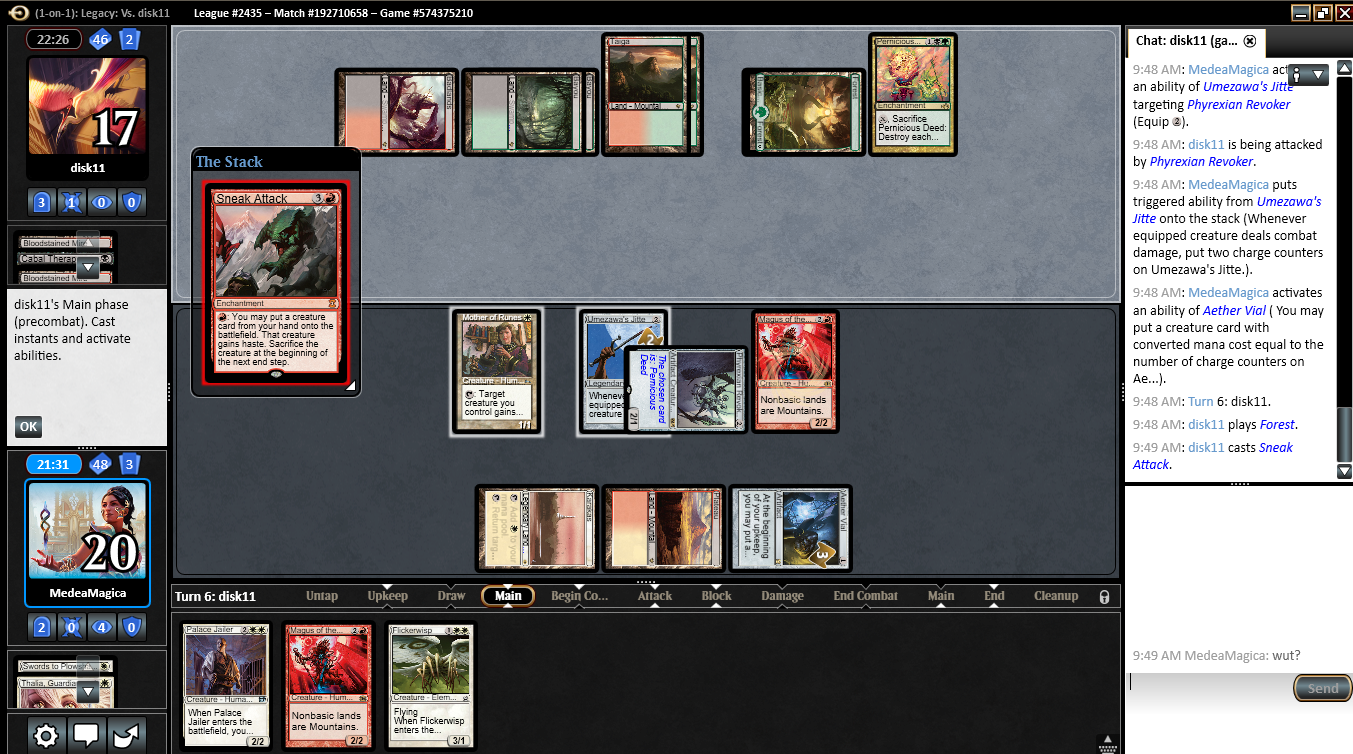 While I take my MTGO testing very seriously most of the time, even I have my moments. I went on a Judge’s Familiar kick for a little while in the tournament practice room and had a hoot. My opponents tended to have very interesting reactions. Here’s the response to me eating a Daze trying to counter my Stoneforge Mystic.

Happy holidays, and I hope your matches are this interesting!