I played quite a bit of Magic Online since Eternal Weekend: 127 matches. Well, I should say 127 matches that I logged data for. I probably played another 20 or so matches, but I didn’t record data when I played while a little loopy from prescription cough syrup or trying out experimental decklists. For example, I went something like 10-2 with a 4x Judge’s Familiar build like Triosk’s from the last MTGO Challenge. Those matches were just played in the tournament practice room, so I didn’t take the results too seriously. I did, however, take great pleasure in typing “hoot hoot” every time Judge’s Familiar came off a Vial to counter a spell. While not really relevant to the rest of the article, here’s the list I was playing around with if you’re curious:

All of the data presented below will be for a 4x Mirran Crusader build. The exact 75 varied by a card or two over the course of the testing, but was essentially the same as I’ve been playing since Eternal Weekend. The data does NOT include matches I played while sick, testing an experimental decklist, or playing the Judge’s Familiar build; I did not log any data in those instances.

127 matches is enough data to get enough data to talk about the deck’s performance, but not necessarily make solid conclusions about every matchup. Feel free to check out my various matchup primers for more detailed thoughts on individual matchups. For now, lets talk about what this data *suggests.* I’ll add some qualitative comments based on more general experience where I think the data is suggesting inaccurate conclusions. My overall record with the deck was 77-50, which is about 61%. That’s not quite the percentage I’m aiming for, but it is certainly a self-sustaining percentage. It should be very clear in a moment why that percentage isn’t higher. I played against 47 distinct decks, potentially a couple more depending on how precise you want to be about deck divisions. Here is the breakdown of the data for any matchup with at least 4 matches in the dataset. Note that the numbers I’m using for my categories here are based on my win percentage, not necessarily what I think the actual match percentage would be.

I’m going to break each one of these categories down a little bit further, but what should be immediately obvious is how polarized these matchups are. The matchups that are very good or very bad are absolute landslides in one direction or another. Additionally, most matchups are falling into one of those categories right now. That’s a bit of an odd position to be in.

Cumulatively these decks make up about 30% of the metagame. Having an overwhelmingly positive matchup against a good portion of the field feels good. The numbers on most of these probably aren’t surprising to most players. Historically, D&T has stomped Delver decks of pretty much every variety. The various Red Prison decks have always struggled with D&T’s mana denial elements. That’s old news. Let’s talk about the other matchups. My percentage in the mirror went up drastically after putting Sword of War and Peace back in my deck; winning the equipment war is essential in that matchup, and SoWaP is a great card for that purpose. That card or an equivalent mirror hate slot like Manriki-Gusari seems essential to me given the deck’s popularity; though D&T is only stated as 4% of the metagame, I feel like it is everywhere both online and on paper.

My results against 4 Color Loam were very positive, though my gut feeling for that matchup isn’t necessarily as good. It’s an awkward matchup (ask any D&T player how to sideboard for that matchup and watch them pull their hair), and one that will get a primer on this site some time in the future. The lists are shifting away from Dark Depths combo, opting to play a more dedicated control game without the combo finish. Without having to fear the combo, I can tap out for Crusader with impunity.

The RB Reanimator matchup is probably much better than I initially thought. In my primer, I suggested that this matchup would likely be close to even; we’ll win pretty much everything where we play Magic, but will just lose some games to the nut draws. I’m finding that my opponents are not having unbeatable hands as frequently as they used to. The deck seems to have slowed down a bit with cards like Collective Brutality giving the deck more game against Deathrite Shaman at the cost of raw speed. It also might be the case that my opponents aren’t mulliganing as aggressively as they should be in the matchup.

Of note, I haven’t played against Grixis Delver in 58 matches. That’s a bit unusual for a deck that makes up such a large percentage of the field. I used to play against it almost every league. I’m not sure if the deck is starting to become more poorly positioned and pilots are switching decks or if this is just how my matchups have fallen recently. I’ve got my eye on this.

This matchup is just fine with 4 Crusaders. Sure, you lose games to Kolaghan’s Command; that card is bonkers. Most games involve your opponent screaming at wave after wave of pro-black idiots chipping away at their life total. I lost one of my matches here testing Palace Jailer in the matchup. Other people kept telling me it’s an unbeatable card in the matchup; I disagreed, but wanted to try it out. Sure enough, I lost the crown to an end of turn Snapcaster Mage and promptly lost the game. In my opinion Jailer is a trap here, just like it was against Miracles.

Both of these matchups really seem to be coming down to “stumbling” based on my notes. Your opponents have a dedicated gameplan, but one that has big holes in it. If you exploit one of those holes in the initial turns, you usually win. Eldrazi often flails around aimlessly if you blow up a couple of lands. ANT struggles against hatebears. You will just lose many of the games to their best draws, but many of the longer games favor you. These even matchups could be improved pretty easily by dedicated sideboard hate, but may not be worth adjusting the deck for. Individual deckbuilding decisions and how draws line up against each other will often be deciding factors here.

17 of my 50 losses (34%) were to the same four decks; that’s a little bit concerening. D&T has always had some bad matchups, that’s nothing new. Elves and Belcher (as well as any other similar turn 1 combo deck) have been in the borderline unwinnable category for years. That’s not going to change anytime soon without making deck-warping changes your 75. Luckily, D&T’s abysmal matchups historically have been small parts of the metagame. Yet this time around there are a few more matches in this category. If Lands and Sneak and Show are trending towards becoming more difficult, we probably need to do something about at least one of those two matchups.

My gut feeling told me that Sneak and Show had become an unfavorable matchup. Many people disagreed with me on that one, remembering the glory days of this matchup essentially being a bye. Now that most versions of this deck are running 2-3 Omniscience in the main as well as Kozilek’s Return in the sideboard, this is just no longer true. Omni is tough to beat with our normal resources. You can Flickerwisp it off a Vial a few times and try to aggro your opponent out (if it’s late enough in the game), but cards like Revoker, Containment Priest, Ethersworn Canonist, and Thalia don’t pack the same punch with an Omni on board. While Sneak and Show isn’t necessary a deck to beat by The Source’s definition, it is right outside of that bubble and frequently a popular choice regardless of how well it is positioned due to its raw power.

Lands is a matchup that has gone on a bit of a roller coaster in terms of matchup win percentages in the past year. It went from about even to highly favorable when Sanctum Prelate was printed. Now that the Lands players have adapted with cards like Barbarian Ring and Molten Vortex, the matchup feels considerably more difficult than before. Note that for some of these matches I had Vryn Wingmare in the main over Prelate, so that may contribute a bit to my low win rate here, but every game has felt rough, even those I’m winning. Lands is certainly a deck to beat right now by The Source’s standards, and one that I personally feel is pretty well-positioned as a whole.

Moving forward, I’d like to do something to slightly improve the Lands or Sneak and Show matchup a bit; I don’t want to continue folding to two popular decks. I’ve talked to quite a few people who like a third Rest in Peace over the second Surgical Extraction; that seems like a potentially good choice moving forward. Allen Norman did that in his top 8 list for the Win a Lotus event in Baltimore, but otherwise his list was identical to what I’ve been doing. Rest in Peace has been one of my most frequently sideboarded in cards recently; you won’t always want the third against fair decks (Grixis Delver), but having access to three seems fine.

Here’s another look at a direction to take the sideboard:

The core of what I’ve been running is here, but redundancy was cut for additional range. That might be better right now, I’m not sure. Trimming numbers on Gideon and Path made room for the Pithing Needle and Relic-Warder, flexible answers for various annoying things. I’ll probably play around with this a bit to see how I like it. It gives a potential answer or two to Omni while also sneaking in a Needle for the Lands matchup. I also imagine that the mirror feels very good for this build.

Though I’m not going to share all of my data today, I will leave you all with the graph of my results. Here is a bigger version of the graph if it isn’t readable on your screen as is. 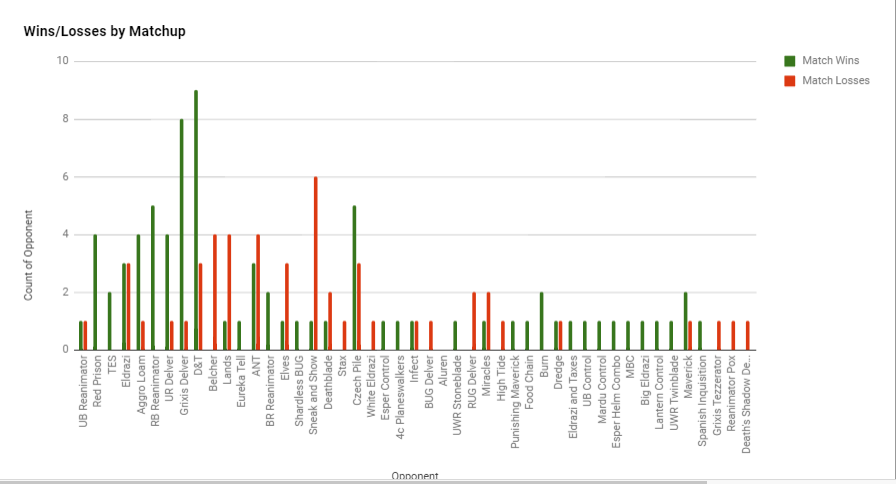 I’m planning on having a follow up article that shares some interesting moments from my Magic Online experiences as well as a guest tournament report in the not too distant future, though it’s a little difficult to say when both of those will happen due to the impending holding season. Until then, Io Saturnalia!