Narninian and I have been discussing and testing a Restore-based Awoken strategy for the past week or so. He put together a great video on it here. The TLDR is that you can actually win a run very easily and consistently with Explosive Sentient by taking a single scaling unit, skipping most card rewards, aggressively removing cards, and upgrading/duplicating restores early and often. The strategy is so powerful that it works even if you begin with Bristling and convert to Explosive after Daedalus. In my *initial* testing of this idea, I rolled off a 6 streak before losing with a very rough run where Explosive was never offered. That is, before I truly understood the intricacies of the strategy, it was still strong enough to carry Covenant 25 runs; oh, and by the way, most of those runs took half of the time it took me to play a normal run! Let’s get into the details of making this work!

Non-Awoken Cards
Generally speaking, you should not take these. A card has to be absolutely amazing for you to take and solve a problem that 5 or so Restores in a turn can’t. To give you a feel, I usually end up picking up 5-8 cards over the course of an entire run; almost all of those are Awoken cards. Notably, picking up 1-2 backline removal cards is probably a good idea. Units like Absolvers and Purifiers are a bit of a pain if you don’t answer them until the top floor (and you’ll often set up top floor); you’re also likely to miss a few Collectors without some backline removal. Glimmer is your premium backline removal since it both can trigger your champion and kills backliners. Every card non-healing card you add to your deck decreases the number of draws that trigger your champion. Keep that in mind.

Generally speaking, with this strategy, you want to draw lots of cards and play lots of free cards with the word restore on them. Then you win. This means that you usually take card draw for both boss rewards, and cards like Engraft, Focused Growth, and Preserved Thorns are quite a bit better than they normally are. Of the remaining healing cards, Awake tends to be the best; it’s an excellent target for the Doublestack Merchant of Magic upgrade and it’s also one of the cards that lets you build up regen stacks quickly vs Cleanse Seraph in the last few turns.

Wildwood Sap and Spreading Spores have the same problem: they do not *immediately* trigger your champion. This means that if you fill your deck with cards like these, you actually increase your survivability but greatly lower your damage output. I will very likely take a circle 1 or 2 Wildwood Sap; it helps you brute force your way through the first couple of boss fights and gives you a good target for a Doublestack upgrade at the Merchant of Magic. As the run goes on, Wildwood Sap becomes less appealing; if you hit the abandoned train event later on in the run, you might find yourself wanting to skip Wildwood Sap at that point.

Spreading Spores is a card that is harder to evaluate. My heuristic is that if I think I already beat Seraph or am on track to beat Seraph, I skip this. If I think I still need more survivability, I’ll take it. I most commonly want this against Cleanse Seraph, where stacking regen in the last three turns of the fight is very important. The difference between Wildwood Sap and Spreading Spores is that one removes itself while the other copies itself; if you’ve spent your entire run decreasing your deck size to execute your gameplan as efficiently as possible, Spreading Spores does very weird things to your deck.

Notably, while Unleash the Wildwood and Restoration Detonation are normally pretty respectable cards, they just aren’t good here. You will stack so much regen that you full heal your champion just about every turn. Accordingly, Restoration Detonation just triggers your champion for one ember; it is just worse than Restore. Unleash the Wildwood…also just triggers your champion; it is just worse than Restore. You get to be really picky when running this strategy.

You only need one unit and your Champion to win most runs. Ideally, you’ll get something like a harvest or incant unit that will naturally grow itself over time without you having to pay any attention to it or dedicate any resources to it. Siren of the Sea and Wickless Baron are probably the best uncommon units for this, but you can make a surprising number of things work. Essentially, the secondary creature has two purpose: pick off any units that don’t die to restores and do damage to bosses. The dream is to have a self-scaling multistriking unit, but just about anything reasonable will still do the trick. Of note, Largestones are a little weird with this strategy. You almost always want to set up on the top floor, so if you Largestone a unit and the top floor is small, your fight gets considerably harder. Largestones still have their roles (more on that in a second), but be careful not to make your run considerably harder by taking them.

Generally speaking, Awoken banners tend to be very bad when you are playing this strategy, and you should avoid them when possible. Most of the Awoken units want you to do things that are actively bad for you, like spending healing cards on something other than your champion or drafting other cards to support them. Animus of Will is the best example of this. Animus of Will really wants you to have cards like Sharpen or Razorsharp Edge in your deck to support it; those cards don’t go with your primary strategy. Animus of Will is one of the best Awoken units in a vacuum, but if you’re all in on this strategy, it’s only of medium power level. Notably, if you throw something like a largestone on the Animus as well as a +10 damage upgrade, it does become pretty good again; again, keep in mind your capacity though and the ramifications of having a largestone unit (or multiple units) 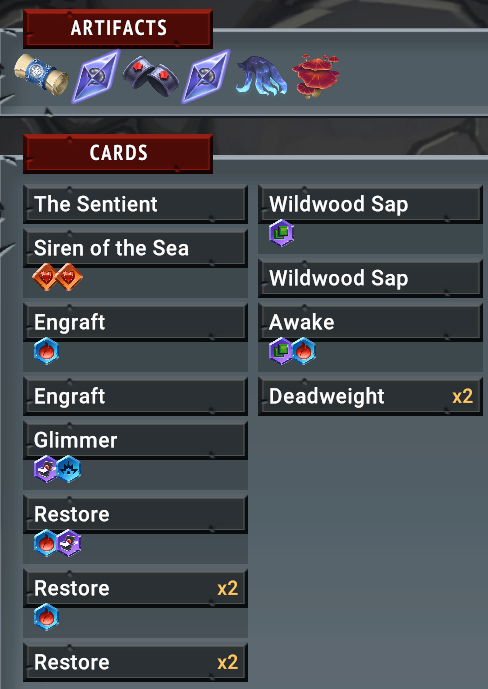 This first run was against Seraph the Chaste (cleanse). I took basically no cards over the course of the run and won handily; notably, Bloated Fungus made it so that I didn’t really need many regen stacks to win, and the combination of Rules of Containment and Cuttlebeard meant that I didn’t need to ever draft something to deal with backline creatures. 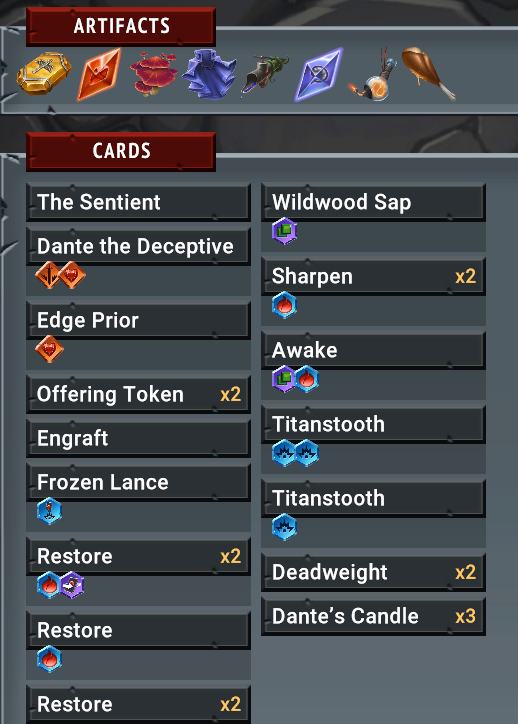 This second deck is much more bloated than the first, primarily due to the presence of Dante’s blights. Notably, I solo’d Daedalus with the champion here; Dante plus absurd artifacts made the rest of the run a joke. Winged Indulgence AND Bloated Fungus helped against Seraph the Chaste greatly. Edge Prior made it so that I could use some Emberstone upgrades on other cards later on in the run. 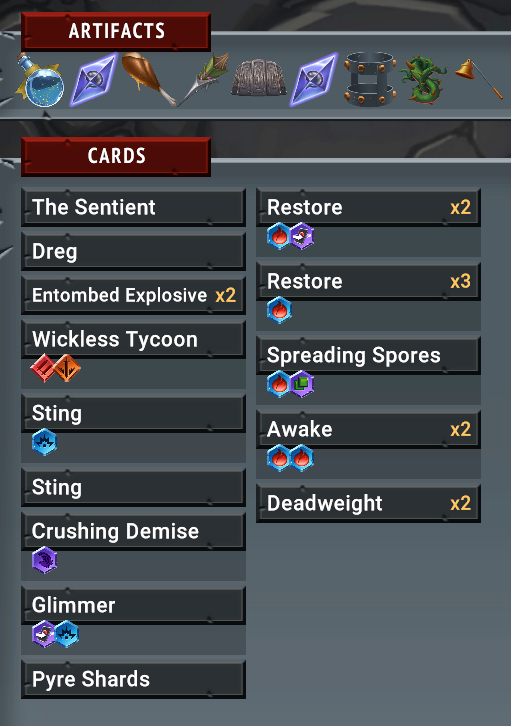 This next run doesn’t really have an impressive backline creature. My multistriking creature only hits for 40 total damage…but since I killed almost every creature on one floor, I acquired an absurd amount of gold. I think I purchased five artifacts in that run in addition to all of those card removes and upgrades. 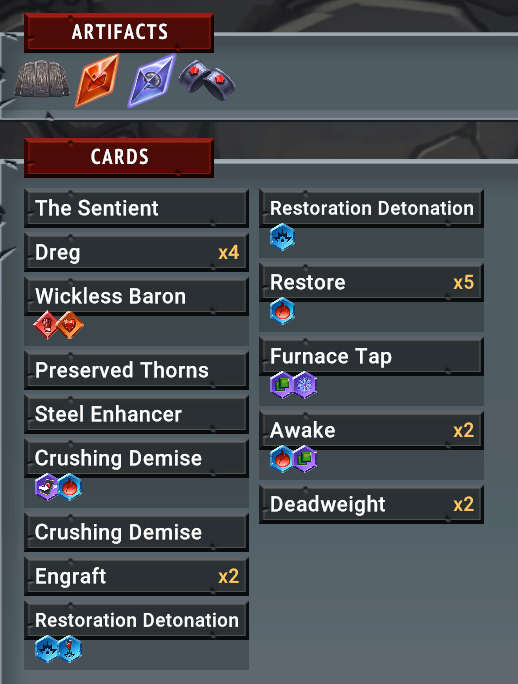 This run is a hybrid run: I startled with Bristling and then converted to Explosive after Daedalus. This run had a little bit less “oomph” than the other three runs, hence I took two Crushing Demises to make sure difficult waves didn’t body me. In retrospect, I maybe could have gotten away without them. 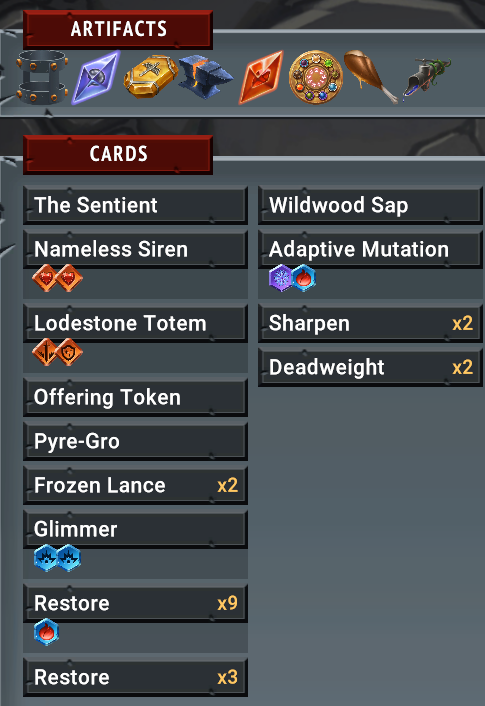 Finally, I’d like to show off just how silly this strategy gets when things go well. I believe that this deck could have killed Seraph by circle 3 or 4 (assuming my Champion was fully upgraded). Hitting the duplication Cavern event on circle 3 when you are doing this strategy is absolutely disgusting. 9 free restores plus three relics that gave additional card draw was just disgusting.

Since I started testing this strategy, my win rate with Awoken has been about 75% (11/15 wins at Covenant 25), whereas my normal Covenant 25 random/random winrate is much closer to 60%. This strategy is *really* powerful, and I encourage you to try it out and incorporate it into your game.

To cap things off, I recorded a run specifically for the purposes of showing off the strategy and talking about the things in this article. Enjoy!