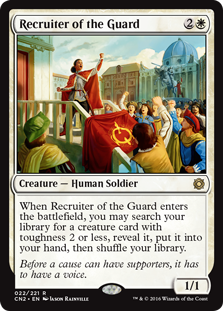 Today’s article was going to be about my progress on a hybrid D&T and Eldrazi deck that I have been working on for the past week or so, but then Gerry Thompson revealed a card that would completely redefine the D&T archetype. Welp, looks like that can wait a week or two! How to describe my reaction to this card… If this site were slightly less academic, I’d just link to a certain clip from Archer where Krieger expresses his excitement. To keep it clean, it shall suffice to say that I was rather excited.

It’s a good time to be a lover of hate bears. In the past few years, we’ve pretty much had a playable card for D&T in every set or two. Thalia, Heretic Cathar was the latest in that line, and she was a card that was great in the shell; furthermore, players were starting to experiment with her in other shells once they saw her power in D&T. I expect all of that creative energy is now going to be turned to making Recruiter of the Guard work. It won’t be difficult.

Imperial Recruiter is the obvious point of comparison, and that card is already historically good in D&T. The price tag and additional color, however, kept many players from adopting an otherwise amazing card. While many people focus on the power of Magus of the Moon, it was Imperial Recruiter that really made the red splash worth it for many players. Recruiter provider card selection and card advantage in a deck that otherwise was relatively lacking in both. Now mono-white players can bring essentially the same effect to the table without weakening the manabase.

Recruiter of the Guard also opens up some developmental space for D&T that is generally reserved for other decks: the toolbox. Many Green Sun’s Zenith decks can run cards like Scavenging Ooze, Reclamation Sage, and Gaddock Teeg in the main at very little cost, but extremely high upside. D&T now gets to do the same. I’ve had many games where I just needed to draw a certain hate bear to completely close out the game, especially in game one scenarios. Recruiter of the Guard provides that option and allows you to run a virtual eight copies of your best card or five copies of a singleton. Cards like Spirit of the Labyrinth, Mangara of Corondor, Banisher Priest, and Ethersworn Canonist are all good enough to be in the maindeck of D&T, but often don’t make the cut because they are not good against the generic field. With a tutor effect in the deck, running singletons of these cards all of a sudden becomes much more appealing.

On that note, running extremely narrow, yet powerful hate cards in the sideboard also becomes more appealing. Dread of Night got you down? Fetch a Veteran Armorer, Adaptive Automaton or Leonin Relic-Warder. Is the Eldrazi menace ruining your weekly events? Go find an Intrepid Hero. Is that budget Burn deck crushing your dreams? How about Kor Firewalker or Fiendhunter Paladin? If you are feeling cute, there’s all sorts of otherwise previously unplayable cards that probable deserve a second look ranging from good ol’ Stonecloaker to Hokori, Dust Drinker.

So what does this mean for decklists moving forwards? Until this morning, I was advocating a “protect the queen” strategy around Thalia, Heretic Cathar; the hope was that by protecting one of the Thalias, you could hope to cause your opponent to stumble just enough to secure the game with the normal assortment of tools. Recruiter of the Guard instead wants to drag the game out a touch more so that the powerful engine has a chance to get online. It’s probably reasonable to cut one Mother of Runes; the card isn’t great in the Miracles and Eldrazi matchups, and you care less about each individual creature being removed once you have a tutor stapled to card advantage. Playing a tutor also means that we’ll need to trim a couple of cards here and there, especially the more narrow effects. Serra Avenger is probably a pretty reasonable trim or cut; Thalia, Heretic Cathar was already fighting for her spots. After that, you just start trimming things here and there to incorporate a few bullets.

I think there’s also one important change to consider: the manabase. I’ve largely been advocating an 11-12 Plains manabase for stability, but it might be time to get a touch greedier. Cavern of Souls on human is likely going to hit a huge percentage of the deck now given our two new toys. I think it’s probably time to bring back the double Cavern manabase. This will mean relying a bit less on WW cards in the sideboard though. Putting all of that together, this is my first draft moving forward:

A few of these choices are a little odd, so I’ll explain. Path to Exile will buy you plenty of time against decks like Infect and Eldrazi that threaten to end the game before your engine would get online; against those decks, Path is almost always better than Swords to Plowshares. Manriki-Gusari is a card that I believe is inferior to Sword of War and Peace in a vacuum; the only place where it is really better is the mirror. Given the recent buffs to the deck and the reprinting of many of the staples, I think D&T is going to be everywhere. I played against it four times at side events at Gen Con, and if that is any indication of its coming popularity, being ready for the mirror is well worth one dedicated slot.

Council’s Judgment has been a staple of my sideboard since its printing, but there might be options that fit better now. If were are going to increase the density of three drops in the the deck while also decreasing the true white sources in the deck, then we can’t reasonably expect to cast this card on time without messing with the other things we want to do. Accordingly, Seal of Cleansing gets the nod, as does Leonin Relic-Warder since it is tutorable. Adaptive Automaton is something that I’d like to test, but it may or may not be better than Veteran Armorer. I’m opting for Adaptive Automaton since it can provide an aggressive boost for the otherwise small Recruiters.

This list isn’t anywhere near perfect. It’s going to take some time to find the right balance of tutor targets vs generically good cards; it’s really tempting to play a bunch of narrow cards, but that may or may not be better than tutoring for staples of the deck like Mirran Crusader that were in there before. Mangara of Corondor is the loosest slot in the main for that reason, and Adaptive Automaton is probably not better than a second Gideon, Ally of Zendikar. It’s also going to be tricky to balance the three drop vs two drops slots. In the past, there has been a tension between ticking Vial up to three or leaving it at two. Now I think it’s going to be correct to tick the Vial up more frequently than before. That in turn wants you to play more three drops for your Vial hands, yet doing so makes the non-Vial hands a bit slower.

We’ve got a lot to think about in the coming weeks, and I’ll be looking forward to seeing decklists start to roll in. This is a huge buff to the deck, but it does come at a price. Expect hate for D&T to be on the rise, and don’t expect to just roll through tournaments without running into hate anymore. There may come a time where we need to trim Plains a bit to hedge more against Massacre, so be ready to adapt. Oh, hey, on that note, a copy of Eiganjo Castle might be reasonable as well. Seriously though? They just gave us Thalia, Heretic Cathar and now we get this?! I still don’t believe it. Apparently the third thing that is certain in life is that someone in R&D loves D&T.