Bill Schlichting has been a supporter of Thraben University for quite some time. He had a pretty good run at GP:Seattle and offered to write up a tournament report for the site. What follows is his material, though I’ve made some minor adjustments. I didn’t do quite as much editing and linking to cards as I normally due, as the last week or so has been really busy on my end.
-Phil

As soon as GP Seattle was announced, I made plans to attend with my local group in Charlotte. I had played Death and Taxes for a number of years, including GP Vegas last year where I made my first Day 2. After Vegas I played other decks, but never felt comfortable enough to register one of them for Seattle; accordingly, I went back to Death and Taxes. With Phil’s help, we came up with the following 75.

I took Travis Brown’s deck from the SCG Dallas Team Open and made a couple of small modifications. I took out the 2 Cavern of Souls for 2 additional basic lands so my deck would be more resilient against opposing Wastelands and Blood Moon effects. I also split the basics between regular Plains and Snow-Covered Plains as a hedge against Miracles and the card Predict.

For the sideboard I removed 1 Containment Priest for an additional Path to Exile. I was expecting a ton of Delver based on the SCG Worcester results, and I wanted 3 Path to Exiles for that matchup. I also swapped Manriki-Gusari for a Sword of War and Peace for the mirror and 8 Moon decks.

He had Grove of the Burnwillows and Dack Fayden, but in all three games I luckily never saw a Punishing Fire. I won Game 1, but he won Game 2 by stealing my Jitte and equipping it to his Revoker. Game 3 was a back and forth game. He eventually used Abrupt Decay on the Germ token and then took Batterskull with Dack Fayden. I cast Cataclysm to push things considerably in my favor and played a land. A topdecked Thalia did the last point of damage to finish things out.

Game 1, he was on the play and played a turn 1 Blood Moon. I have 2 Plains in hand and can cast my spells. All he can do is cast Chalice for 1 before conceding.

Game 2, we get to a point of I have a Revoker (naming Chandra Torch of Defiance) equipped with a Sword of Fire and Ice and a Sanctum Prelate on 4. He has a tapped Goblin Rabblemaster, 2 tapped Goblin tokens, and Chandra. I attack with both creatures, he flashes in Sulfur Elemental and trades with the Prelate. Sword of Fire and Ice shoots the Rabblemaster. I then tap 7 lands, and play Cataclysm followed by Flickerwisp, targeting the remaining Goblin token. He concedes with 2 Fiery Confluences and another Chandra in his hand.

Despite being Hymn to Tourached 3 times, Mirran Crusader and friends get the first game. In Game 2, an early Rest In Peace and 2 Mirran Crusaders won the game.

I play Noah Walker, who later made the Top 8. In Game 1, I lead with a Thalia and Wasteland his Volcanic Island. He then Wasteland my Rishadan Port, and leaves me locked under my own Thalia. I never drew another land.

In Game 2, he ended up with 3 active Deathrite Shamans, a True Name Nemesis, and bolt for my Mother of Runes. He Cabal Therapied away my Sword of Fire and Ice, and my Thalia and Mirran Crusader can’t get past the TNN. I never drew a flyer, and the Deathrites kill me.

He had maindeck Back to Basics,Rest in Peace, Energy Field, and Helm of Obedience. I mulliganed into a hand with four non-basic lands and a Vial. The Vial was counted and Back to Basics locked me out of the game. He eventually Helmed me. Game 2 he Miracles Entreat the Angels and wins easily.

In: 2 Cataclysm, 2 Council’s Judgment, 1 Sword of War and Peace
Out: 4 Mother of Runes, 1 Batterskull
Current record: 4-2

My opponent locked himself under an Ensnaring Bridge on Turn 3 and followed it up with 2 more Bridges. Eventually I checked the math and I would deck myself before him, so I conceded. I won Games 2 and 3 through Sword of Fire and Ice and Sword of War and Peace easily since he never drew a Bridge.

Game 1, he activates a Kuldotha Forgemaster and brings a Blightsteel Colossus into play and attacks. In Game 2, he plays an Ancient Tomb and passes. I Wasteland his land. He plays a Glimmerpost and again can’t make a play. I play a Thalia. I then Wasteland his next land drop, leaving Thalia and friends to finish the game. In Game 3, a Revoker naming Metalworker (he had 2 of them in play) coupled with mana denial won the match.

I play the mirror match. Both games come down to I have a Jitte and he doesn’t. After the match, we discuss the intricacies of the mirror and how to sideboard, as he made questionable sideboard decisions.

In: 1 Sword of War and Peace, 2 Path to Exile, 2 Council’s Judgment
Out: 4 Thalia, Guardian of Thraben, 1 Sanctum Prelate
Current record: 7-2

I play the mirror again. This round was basically a repeat of Round 9. I won the equipment war. I had the experience in the mirror and he didn’t. We discussed the mirror and sideboard decisions and how to exploit the apparent symmetrical cards (i.e. Phyrexian Revoker and Pithing Needle naming cards your opponent has in play but you do not).

In: 1 Sword of War and Peace, 2 Path to Exile, 2 Council’s Judgment
Out: 4 Thalia, Guardian of Thraben, 1 Sanctum Prelate
Current record: 8-2

I play the third mirror in a row. Game 1 evolved into a bogged down board state. 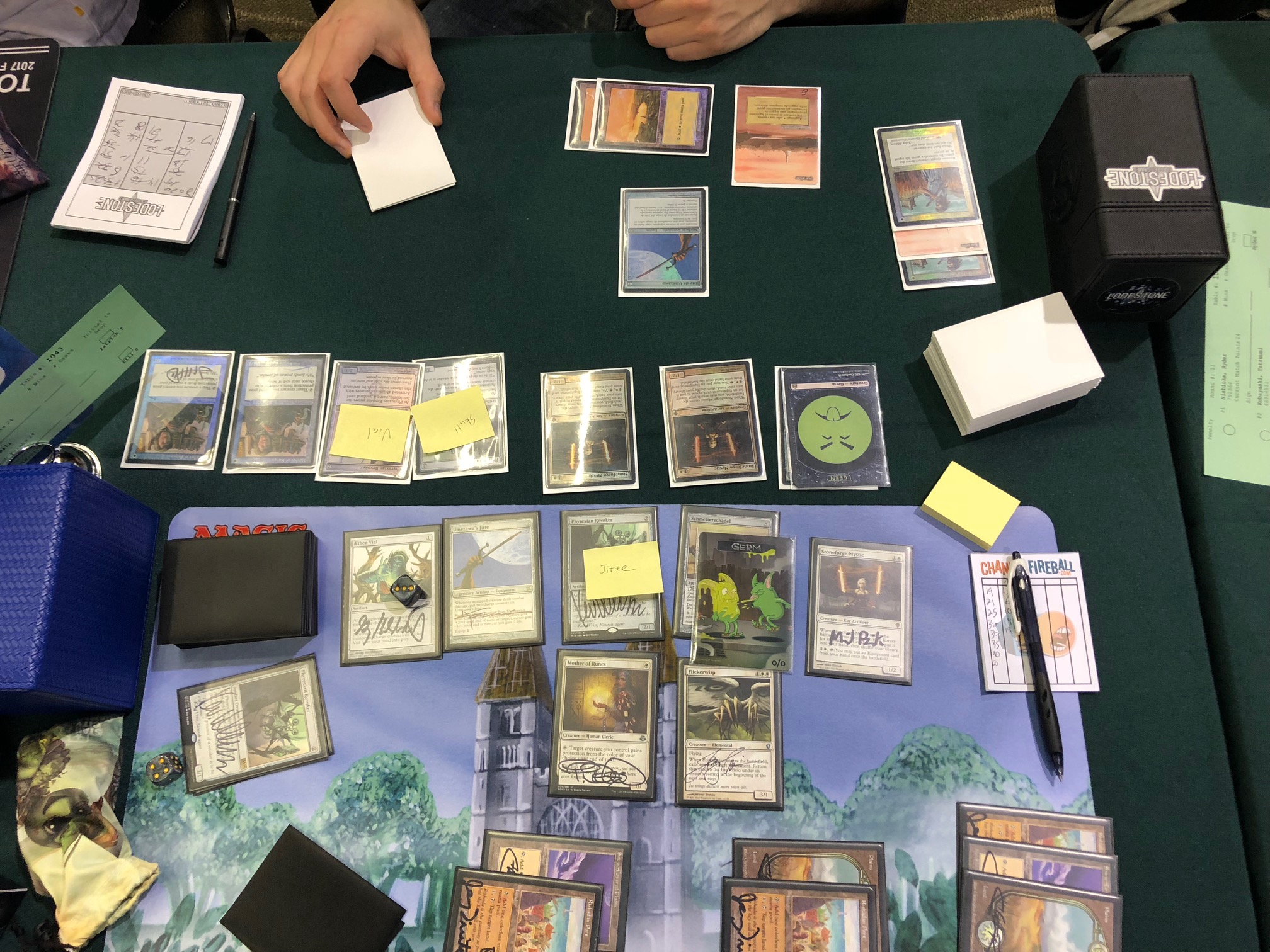 My Revoker named Jitte and his Revokers named Vial and Batterskull

Eventually he won due to having 2 active Mother of Runes to my 1 Mother. Game 2 he was able to get the Recruiter of the Guard and Flickerwisp engine going and had more equipment (including a Manriki Gusari) to win the match. We both agreed that he drew better than I did.

In: 1 Sword of War and Peace, 2 Path to Exile, 2 Council’s Judgment
Out: 4 Thalia, Guardian of Thraben, 1 Sanctum Prelate
Current record: 8-3

We trade Games 1 and 2, and I was able to grind out Game 3 with 2 Rest In Peace and topdecking a Mirran Crusader that couldn’t be killed by his Kolaghan’s Command.

In: 2 Rest In Peace, 2 Council’s Judgment, 2 Cataclysm, 1 Sword of War and Peace
Out: 3 Phyrexian Revoker, 4 Swords to Plowshares
Current record: 9-3

In Game 1, he eventually has 2 Vampire Hexmages, a Reanimated Thalia, and a Dark Depths against my Thalia, Wasteland and 2 additional lands. He goes through the motions and creates a Maret Lage.

In Game 2, he reanimated a Grave Titan on turn 1 that got Sword to Plowshared. A turn 2 Thalia stops the zombies. I get a Serra Avenger in play to also block the zombies and attack. He then hard cast a Grave Titan and I topdeck a Council’s Judgment. The Avenger goes the distance.

In Game 3, a turn 2 Rest In Peace turns off the Reanimator portion and a Karakas and Wasteland turn off the Dark Depths. A couple of creatures get the 20 damage in.

Game 1 his Dark Confidant and 2 Knight of the Reliquaries win the game. In Game 2, an Umezawa’s Jitte won the game by killing 2 Dark Confidants and 2 Mother of Runes. In Game 3, I was able to deny mana from him to allow Thalia, Flickerwisp, and Batterskull to win the match.

In: 2 Surgical Extraction, 2 Rest In Peace, 2 Cataclysm
Out: 2 Mirran Crusader, 2 Recruiter of the Guard, 2 Thalia, Guardian of Thraben
Current record: 11-3

I win Game 1 through beat down and mana denial. Games 2 and 3 came down to him stabilizing with multiple removal spells (including at least 2 Forked Bolts) and drawing Liliana of the Last Hope. I drew no answers each game, and the Planeswalker won the match.

In: 2 Rest In Peace, 2 Council’s Judgment, 2 Cataclysm, 1 Sword of War and Peace
Out: 3 Phyrexian Revoker, 4 Swords to Plowshares (2 Revokers went back in before Game 3)
Current record: 11-4

I figured if I had won round 15, I would have had a good chance of top 32. Win the loss, I believed I would have been nowhere near the cash. Then I saw the final standings: 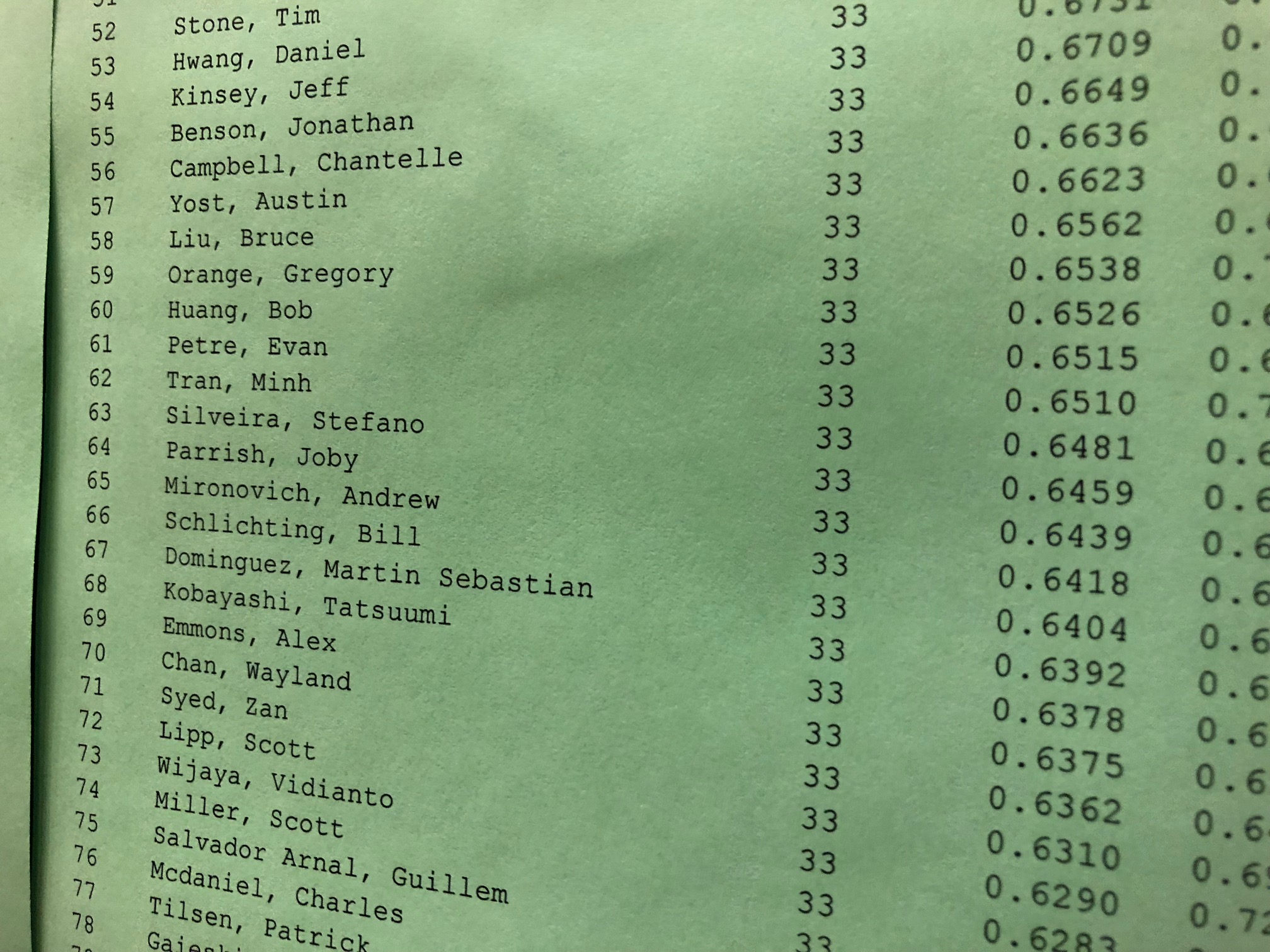 66th place out of about 1600 people! Although this finish was just out of the money, it was my best result at a Grand Prix so far. It is possible that my 1st Round no show cost me those tiebreaker points, as my losses ended the tournament at 12-3, 12-3, 11-4, and the Top 8.

I ended up playing 3 Death and Taxes, 2 Czech Pile, 2 8 Moon, Grixis Delver, BUG Delver, Miracles, 4c Punishing Thieves, Turbo Depths Reanimator, 4c Aggro Loam, and MUD. Out of 14 rounds, I played only 6 Brainstorm decks. To paraphrase Travis’s report, playing a deck you know is important when facing a large tournament. I didn’t play against any truly unwinnable matchups expect for the Round 6 Miracles.

Going forward, if the metagame stays the same, I wouldn’t change anything out of the 75. I think cutting Revokers in the Czech Pile matchup may be a mistake, especially if that deck is playing more Liliana of the Last Hope against us. Cataclysm was a match winner in the matchups that I cast it, notably in Rounds 3 and 4. It also forced my Round 12 Czech Pile opponent to take it with a Thoughtseize early in Game 3 instead of some other spell.

As an aside, the day before the Main Event, I was playing in the last round of a side event against Maverick. In Game 1, I believe I had the best Sanctum Prelate I could have ever had against a creature deck. He played Sylvan Library the previous turn when I played the Prelate on 1. Here were the first two cards he drew off of Sylvan Library… 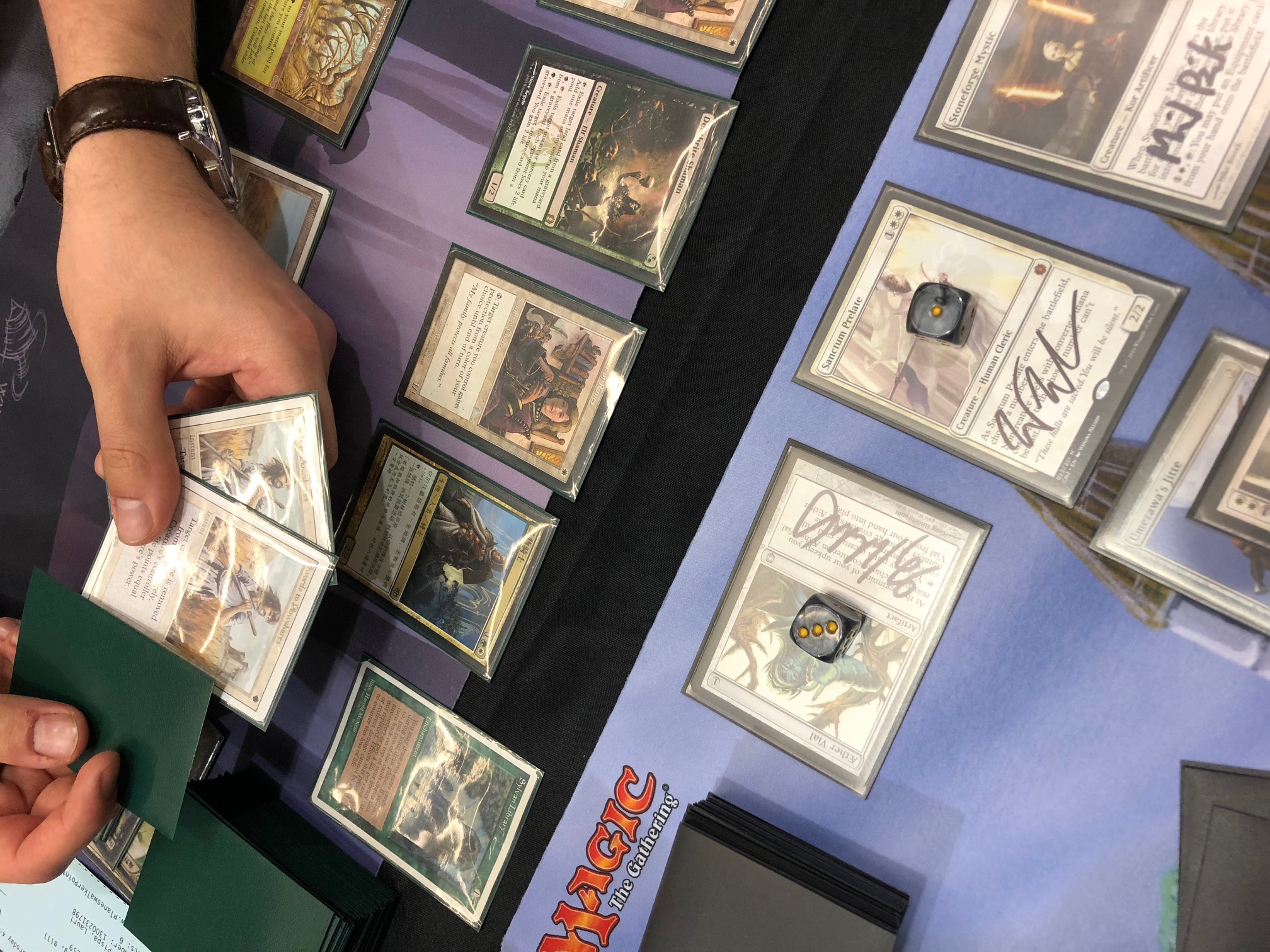 Thank you for reading my tournament report and may all your opponents’ spells cost 1 more!