This page is brought to you by Chris Cunningham. I’ve made minor edits here and there for formatting and clarity, but the program and content are his. Chris is a community college math professor who has been playing and tinkering with Death & Taxes since 2015, with his best Legacy finish being a day 2 at GP Louisville with a 75 that included multiple Mangara of Corondor, Palace Jailer, and Chrome Mox. He is an avid reader of Thraben University’s content and a hobbyist programmer.

This article stems from a discussion on the MTGLegacy subreddit where I claimed (without evidence) that a manabase with 3 Cavern of Souls and 4 Aether Vial was not good enough to splash an off-color creature like Orzhov Pontiff, especially if you want to cast it on curve. The sarcastic reply was “I’m sure you’ve done the math.”

As a math professor, I realized I should probably just do the math.

So I did. This article outlines how many colored mana sources an Aether Vial deck needs to cast (or Vial in) its spells in on time. Enjoy!

For a non-Vial manabase with 24 lands, Frank Karsten has written the authoritative article on how many colored mana sources you need to cast your spells. You should use his article to answer questions like “How many white sources do I need to cast Swords to Plowshares on turn 1?”

The precise question is good, because it only counts bad draws against the manabase if the hand would have been a keep based on the number of lands and spells, but it did not have the right colors. The best thing about the precise question is that it has a precise answer: 14. Your 24-land constructed deck should play at least 14 untapped sources to cast one-drops.

Our decks have Aether Vial as an integral part of our manabase. We want to keep Aether Vial in mind without the oversimplification of counting Vial as another land drop. But still, the question “How many black sources do I need to splash an Orzhov Pontiff?” is not precise enough. I’ve transformed the question into the precise question below, and written a program to answer it.

“Assuming I mulligan hands as in Karsten’s article (except that I am okay with keeping one-landers with Aether Vial and I’m mulliganing all hands with 3+ vials), how many black sources do I need to land turn 4 Pontiff at least as often as I am used to landing a turn 4 Flickerwisp? And what if I’m okay with my manabase being bad twice as often?”

If you are splashing in Death & Taxes and want to play your splash card as often as you have been playing Flickerwisp, you need to play 9 colored mana sources on top of your Vials.

If you are splashing in Death & Taxes and you are okay with it being twice as awkward as Flickerwisp, you still can’t get away with only 4 Cavern of Souls, but if you include some duals in there, you don’t have to play any fetchlands.

If you are splashing Pia and Kiran Nalaar, even if you are okay with your splash being twice as awkward as Flickerwisp, you need 12 colored sources on top of the Vials, which starts seriously cutting into your basic Plains count and forcing you to cut some Rishadan Port.

In the following tables, X represents a colored mana symbol. The numbers in the boxes are the number of lands required to hit that casting cost at [benchmark] percentage of the time. If a slot says “impossible,” that means you cannot hit that benchmark with that manabase, *not* that it is impossible to get that cost by that turn. 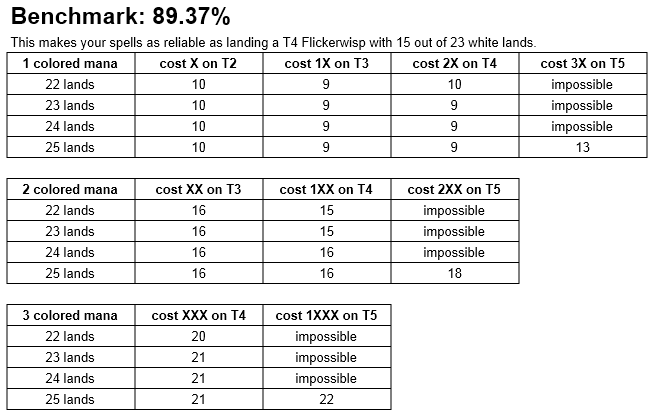 The Math, or Always Play All Four Caverns

The math is the same math as in Karsten’s article, except for the change in mulligan strategy and the fact that you get a success if your Aether Vial is online in time. However, the math still gets fairly tedious to work out by hand, so it’s all in a Python script you can find here

If you’d like, you can run it yourself on a different manabase using your own benchmarks. For example, let’s say that you have been running splash humans in a 24 land deck with only 4 Vial and 4 Cavern, and you think this has been performing well enough. Running those inputs:

gives you this output:

This means you will hit your 3-drop creature on turn 4 (by cast or by vial) in 72.57% of your keepable opening hands.

If this has felt good enough for you, then you can experiment by say, cutting a Cavern to go down to 3 lands and 4 Vials. You can find out exactly how important that 4th Cavern is.

Dropping just one Cavern cuts our T4 play percentage from 72.5% to 66.5%, which is pretty significant (A change of 6% will be noticed about every 16 games, which is more than once per day of tournament Magic). Accordingly, I’d always at least play the fourth Cavern.

Playing really good mana is very important to me, and the cutoff I’ll use for “good” is the Flickerwisp benchmark. We all know that Flickerwisp is often awkward to cast, but I don’t want my mana to be more awkward than that. So if I plan to splash a card like Magus of the Moon, I will have at least 9 red sources in the deck to make sure I can land Magus by turn 4 at least 89% of the time like Flickerwisp. My splash manabase would be:

If you are okay with the “decent” cutoff (that leaves cards dead in your hand no more than twice as often as a Flickerwisp would normally be dead), then you only need 6 red sources to play Magus of the Moon. This means you don’t have to fiddle around with fetchlands as long as you are willing to be weaker to enemy Wastelands:

If you plan to splash Pia and Kiran Nalaar, it is literally impossible to make it to the “good” cutoff above unless you have 18 red sources and 25 lands. This is mostly because it is too hard to make 4 land drops at all by turn 5 with natural draws. So I’ll make it to the “decent” cutoff that leaves P&K dead in my hand only about twice as often as a normal Flickerwisp would be. That means I need 12 red sources, so I’d go up to 24 lands and do something like:

If you want to splash both P&K and Orzhov Pontiff, Phil’s manabase below looks as good as we can probably do, with 12 red sources and 11 black sources. I don’t see any good way to get more Ports back into the manabase without going up to 25 lands. The only way to let black sources go without dropping red sources would be to go down 1 fetchland and up 1 Plateau, but having 9 sources of “basic Plains” is really nice too. Ultimately, if you are playing Wrb, with P&K, the list below looks like an acceptable option.

Decent Splash for 2RR and 2B Creatures, Phil Gallagher, 24 Land

The code is hosted at http://www.repl.it, so if you make an account there, you can fork my code and mess it up however you like. The easiest thing to change might be the mulligan strategy — if you never keep 1-landers with vial, for example, you can set that one to a “0”.

If you have any other mana questions, feel free to send them my way.